Galway put down the Wexford revolution 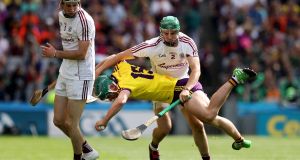 For a while there, Wexford had us going. They came to Croke Park as fairytale, carrying the ever-so slight whiff of believability. But in the end, a powerful third quarter from Galway underlined why the western side are favourites for the All-Ireland. Micheál Donoghue’s side are Leinster champions for the second time and the chances of a first Liam MacCarthy since 1988 are patently growing.

They got their fill of it here for a fair spell. If you’re going to draw the biggest ever crowd to a Leinster final, you’re as well to give them something to see. Under a summer sky, the only worry in the world for any of the 60,032 who came to Croke Park was the vague prospect of an anti-climax. With the sides see-sawing the lead through the opening half hour, however, that turned out not to be a problem.

This was a gloriously even game throughout the opening period, full of monster scores and shape-shifting hits on either side. The teams were level seven times in the first half. Even though Galway generally looked the more likely to put significantly mileage between the sides, Wexford regularly flummoxed them in response.

Joe Canning wasn’t much in the game for the simple reason that he had to keep tracking Matthew O’Hanlon, the Wexford centre-back who continually pushed on into the attack. O’Hanlon nicked a couple of fine points for himself in the process before half-time and with Willie Devereux and Diarmuid O’Keeffe also on the scoreboard, Wexford’s ploy of using their sweeper to spring their defenders into shooting positions was clearly paying off.

Galway’s route to goal was much more conventional and no less effective. Conor Cooney was unstoppable at full-forward, strapping his team’s attack to his back and revelling in the responsibility. He had four points from play on the board by the break and Wexford looked clueless as to how to deal with him. They started with Devereux on him and when that didn’t work, they sent Simon Donohoe over to have a go. By early on in the second half after Cooney put up his fifth, Liam Ryan had the job. They kept throwing darts but none of them stuck.

With Joe Canning reliable as ever from frees, it all added up to a 0-14 to 0-11 half-time lead for Galway. It was the sort of advantage whose merit you could only judge by what came in the third quarter. Just small enough for Wexford not to be discouraged out of a comeback, just big enough for Galway to know that any sort of sustained push would see them out the gap.

As it turned out, both possibilities got an almost immediate airing. The second half was only five minutes old when Wexford were awarded a penalty down in front of an empty Hill 16. Conor McDonald, who had put in a stellar opening half with a couple of fine points from play, was given the responsibility for it, after Davy Fitzgerald waved back the advancing goalkeeper Mark Fanning.

McDonald’s low effort was unconvincing though and Colm Callanan had time to dive to his left to bat it away. And though Chin scored the resultant 65, it was cancelled out almost immediately by Canning at the other end, keeping Galway’s three-point lead intact.

From there, Donoghue’s side eased clear. They dominated Wexford in the air for the next quarter-hour and put them away with seven points on the bounce. Conor Cooney was still untouchable, Joseph Cooney wasn’t far short of it. When the latter stitched an excellent score from out on the right after 50 minutes, it pushed Galway out to a 0-21 to 0-12 lead.

Wexford did raise a brief gallop, rattling in a quick 1-2 including a goal by O’Keeffe after good work by Jack Guiney. But Galway’s response was authoritative, cancelling out the goal and then some with the next five points in a row. Cooney had three of them, putting the tin lid on a man-of-the-match display.

1 Sky Sports customers set to save on bills until Premier League returns
2 Gerry Thornley: Changes to tackle laws could transform rugby by time of next World Cup
3 Jack Grealish needs to show that his remorse is real this time
4 ‘This is sick’ - seventh-tier Swedish club cancels friendly after betting mayhem
5 My favourite sporting moment: Phil Mickelson’s miracle shot at the 2010 Masters
Real news has value SUBSCRIBE