Kerry make it five Munster minor titles in a row 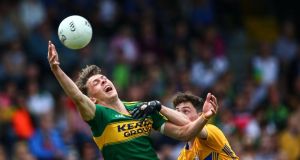 Munster and All-Ireland champions Kerry completed their 25th unbeaten minor championship game - they haven’t lost now since 2013 - with a display of firepower that left Clare caught in the headlights.

Kerry’s twin attacking threats did most of the scoring in what was one of the most one-sided Munster finals in recent history, with Kilgarvan’s Donal O’Sullivan accounting for 2-8 while David Clifford finished with 0-6, all from play.

Some of Clifford’s point taking was sublime and with Donal O’Sullivan, Fiachra Clifford and Brian Friel also adding points Clare were always on the back foot.

“It worked out alright,” said Kerry manager Peter Keane said afterwards. “We started slowly enough, but got into it well in the second-half and kicked on. The defence, we were very happy with that. They had gone well against Cork too the last day. Our kickout was a bit off so that maybe gave us a small bit of cause for concern. It improved a bit in the second-half.”

Clare boss Seamus Clancy was magnanimous in defeat, saying: “One thing I am proud about with our lads, we believed we were going to win it in the dressing-room beforehand. We came down here earlier this year and were beaten by 13 points. It was difficult to rise from that. The lads came back, though, and this is our fifth championship game and we have three wins under our belt.

“You can’t put yourself in young lads’ shoes and deal with what they’ve to deal with against a super team. We needed to get the scores early and they didn’t come.”

Clare did open the scoring through midfielder Diarmuid Ryan, but despite some darting runs from Ross O’Doherty, Dermot Coughlan and Gearoid Cahill, the Kerry defence stood firm. Well marshalled by Chris O’Donoghue, Kerry kept turning Clare over and they only managed a single score for the rest of the half, Dermot Coughlan slotting over a free in the 26th minute.

Kerry tacked on four rapid points in the opening six minutes, two each from Clifford and O’Sullivan but then kicked a succession of wides (10 in total for first half) before David Clifford ended a 15-minute barren spell in the 21st minute.

Clifford added three more points before half-time as the Kingdom held a commanding eight-point advantage, 0-10 to 0-2.

Things got worse for Clare upon the resumption as Kerry continued to score from all angles. The Kingdom could even afford to substitute Clifford midway through the second half, such was their domination. Dermot Coughlan added Clare’s lone second-half score.

Kerry’s class was complete when Donal O’Sullivan added a brace of goals as Clare now head for the quarter-finals along with a powerful looking Kingdom outfit.