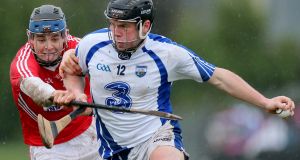 Jake Dillon: Waterford sharpshooter will be in action for De La Salle in the county final. Photograph: James Crombie/Inpho

Antrim SFC final replay - Cargin v Lámh Dhearg, Corrigan Park, 4.0 – This year’s championship sounds like a magical realism plot: interventions from on high (to prevent a penalty shoot-out in the semi-final), a lord mayor in goal and a team playing an apparently endless season. Otherwise it’s the clash of the last two champions with holders Cargin possibly ready to punish Lámh Dearg for not putting them away on the first day.

Down SFC final - Kilcoo v Warrenpoint, Páirc Esler, 4.0 – On the trail of a seventh title in eight years, Kilcoo will want to avoid the slow start of last year’s semi-final against the same opponents but they look likely to get there.

Offaly SFC final - Ferbane v Rhode, O’Connor Park, 3.30 – Good news for Rhode with Conor McNamee beating a red-card rap during the week and he is eligible to take his place. Evergreen Niall McNamee still has the goalscoring touch and Ferbane’s 25-year wait for a title looks set to continue.

Roscommon SFC final - Pádraig Pearses v Roscommon Gaels, Dr Hyde Park, 4.0 [TG4, deferred coverage] – Experienced manager Pat Flanagan takes Pearses to the brink of a first county title in a final that pitches the individual talents of their clutch of county players against the stronger collective of the Gaels. There’ll be a fresh winner either way as the latter have to go back 15 years for their last success. Pearses however have come a harder route and look better stacked up front.

Tyrone SFC final - Errigal Ciarán v Trillick, Healy Park, 4.0 – Trillick with Donnellys and Brennans abounding have probably been more impressive but Errigal have a good shout here. Ben McDonnell has been excellent at centrefield and with Peter Harte and Darragh Canavan up front, they have the artillery.

Westmeath SFC final - Garrycastle v St Loman’s, TEG Cusack Park, 3.30 Having restocked after the Leinster success earlier in the decade, Garrycastle come into this looking more structured than a slightly misfiring Loman’s, who are anxious to regain the title lost last year and may just about do so.

Clare SHC final - Cratloe v Sixmilebridge, Cusack Park, 3.15 [Live, TG4] – Attention in Clare focuses back to the pitch where this is an interesting clash between Cratloe’s county players, led by Podge Collins, and the ’Bridge’s smaller contingent but more robust collective.

The former have also suffered the usual distraction of having their team – nearly all of whom are dual players – involved in the football championship until recently. If they have fully maintained their hurling sharpness during the rigours of the season they have a shot but ultimately, Sixmilebridge look that bit better balanced.

Waterford SHC final - Ballygunner v De La Salle, Walsh Park, 3.0 – The team’s breakthrough victory over Na Piarsaigh in last year’s Munster final was dimmed a little by the disappointing defeat by eventual champions Ballyhale but Ballygunner are back on the blocks, looking to improve this season.

In keeping with the rise of local monopolies, the Gunners are after a sixth successive title this weekend but De La Salle are familiar opponents with their established players, like Kevin Moran and Jake Dillon.

Between the two clubs they have won 10 of the last 11 Waterford championships. The champions though have the edge and in Dessie Hutchinson – of that ilk and reclaimed from professional soccer – they have uncovered a serious scoring force, enough to keep the 31-match unbeaten run in the county ticking over.