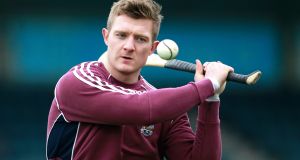 Joe Canning: “I don’t know when and I don’t know how or who’s going to sort it but hopefully from our players’ perspective, it gets sorted sooner rather than later.” Photograph: Colm O’Neill/Inpho

Former Hurler of the Year, Joe Canning has expressed fears that the current impasse in Galway hurling will set the county back for years. He was speaking on the Second Captains podcast.

Galway hurling manager Micheál Donoghue surprisingly stepped down – for stated personal reasons but amidst rumours that he was unhappy with the resourcing of the team at loggerheads with county chair Pat Kearney – from the position in August.

Since then, his selectors Francis Forde and Noel Larkin and former under-21 manager Tony Ward have all withdrawn from contention to succeed him, pushing the replacement process back to the clubs.

Canning told the podcast he couldn’t understand why no-one wanted to manage a team that had won the All-Ireland two years ago and reached the final last season. This summer, a late defeat by Dublin in the Leinster championship ended Galway’s hopes of any further progress.

Asked about his frustration with the situation, which has also seen the county board come under fire from sponsors Supermacs, he replied:

“That’s all it is, just very frustrating. This isn’t I suppose a thing that’s just come up this year; it’s years and years in the past as well. Hopefully it gets sorted.

“I don’t know when and I don’t know how or who’s going to sort it but hopefully from our players’ perspective, it gets sorted sooner rather than later for the good of Galway hurling and football because, if it’s not, it’s going to set us back years and that’s the unfortunate thing.

“There’s a lot of egos there that just want to do it for themselves and I don’t think for the right reasons so hopefully they’ll understand that Galway is bigger than one or two people and hopefully the right thing is done at the end of the day.”

He also said that the players had not yet been consulted on the subject of a potential new manager.

“I honestly don’t know what’s happening. It’s very frustrating on the players’ part. When you think about it, we won the All-Ireland two years ago, have won 20 of our last 22 championship games and are probably the most consistent team in the championship over the last three years.

“There’s a lot of questions to be asked that’s probably not asked already but that’s for other people and not for players.”

He said “he couldn’t believe it” when he heard that Donoghue had resigned, having in 2017 broken the county’s long All-Ireland barren run stretching back to 1988.

“They still have plenty to offer. We were very happy with all the management team,” said Canning.

“We still wanted them and still probably do but they’ve all declared that they don’t want to go back so that’s disappointing from a players’ perspective because we were very happy with them and we felt after this year that, seeing how the year went, we had something to prove to ourselves next year and we feel we have a panel probably strong enough to compete.”