Financier called a 'donkey' in Mayo GAA county board email 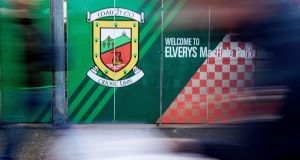 “Elvery’s have been great partners for Mayo GAA since the mid-1990s and continue to be so and we are most grateful for the support they give to our teams and clubs,” said the county board. Photograph: Bryan Keane/Inpho

Mayo GAA has responded to the latest broadside from the Mayo GAA International Supporters Foundation by refuting “as a matter of urgency” an allegation concerning the county sponsors and saying that it will be addressing the whole area of the county board’s relationship with the foundation at its next meeting.

The county board meeting scheduled for October 16th had been put back for a fortnight until Wednesday week (30th) because county chair Mike Connelly had been unwell.

A letter sent by the foundation to the county board and clubs, dated last Sunday, October 20th made new allegations about the governance of Mayo GAA as well as accusations that attempts had been made to bully the foundation’s founder.

Among the allegations was that the current sponsors of the county, Elvery’s, stood to benefit from 100 All-Ireland tickets supplied by the board if Mayo reached the final and so diminishing the value of the sponsorship by nearly as much as the performance bonus for reaching the ultimate stage of the championship.

This was refuted by the county board in a statement issued to The Irish Times on Monday afternoon.

“Mayo GAA are in the course of preparing a full response to the clubs in relation to the board’s dealing with the foundation, which will be dealt with at the next county board meeting scheduled for Oct 30th.

“However we need to point out as a matter of urgency that all commercial and sponsorship deals are confidential between the parties. What we can confirm is that the current main sponsorship represents a significant investment annually for Elverys when the baseline figure and performance bonuses are included. It is one of the largest sponsorship in the GAA. We can also confirm that all sponsors’ tickets are invoiced and paid for in full.

“Elvery’s have been great partners for Mayo GAA since the mid-1990s and continue to be so and we are most grateful for the support they give to our teams and clubs.”

It held its big fund raising dinner in New York in May in the aftermath of Mayo’s winning this year’s national league and when the county was playing New York in the Connacht championship on the same weekend as the event.

At the dinner county Mike Connelly described O’Leary as “one of the greatest Mayo supporters”.

But relations deteriorated to the point that in late August the foundation decided to withhold some €250,000 that had been raised for the county, pending the furnishing of business plans for its expenditure.

O’Leary further disclosed in September that he was interested in securing the naming rights for Castlebar’s MacHale Park, currently held by Elvery’s. Included in an appendix to Sunday’s letter is correspondence between him and Mayo GAA’s chief commercial officer, Tom O’Reilly, in which the former’s “interest is noted”.

In another appendix there is a copy of correspondence from Mr O’Leary, which was sent to an administrator and then forwarded from him to the county executive and also copied to O’Leary: “I would ask the board to answer this donkey but that probably won’t happen this time either.”

In his letter to the county board, O’Leary protested about being called a “donkey”.

“As you and other officers are aware, I was called a ‘Donkey’ in an open email by a senior officer of the Mayo board (Appendix 2). As you can appreciate it got a bit personal at that point! Please understand that despite the distressing aspect of the personal insults I am not one to be bullied or intimidated!”

At Saturday’s special GAA congress in Cork, association director general Tom Ryan was asked whether he was concerned that the public questioning of GAA governance by sponsors and benefactors in both this case and in Galway might set a precedent.

“No, I don’t think so,” he said, “because that has been unprecedented up to now and I think counties have a very good relationship with their sponsors and it’s a very, very important stream of income.”

1 Colin Kaepernick’s exile is too fresh for NFL to speak out on US protests
2 Ken Early: Why international football is fading into obscurity
3 Kick It Out urges Premier League players to take a knee
4 ‘A radical departure’: Who are CVC and what are their plans for rugby?
5 IRFU plan gives club rugby hope of return to action this year
Real news has value SUBSCRIBE