With Mullinalaghta and Cavan, Mickey Graham has every plate spinning 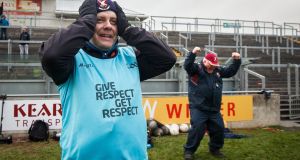 Mickey Graham had officially been the Cavan manager for less than 48 hours last August when he gave an interview to the Longford Leader newspaper. As the manager of back-to-back county champions Mullinalaghta, everyone took it to be a fair bet that his future lay on the intercounty scene so there were no hard feelings around the place.

Indeed, the only sadness on the ground was that the Cavan and Longford jobs had come up for grabs at the same time – Longford had popped the question alright but once Cavan made eyes at him, the locals knew they’d never make his heart beat like his home county could.

Still, he was the Mullinalaghta manager and stressed that he would remain so for the rest of the championship. “Mullinalaghta is my sole commitment at the moment,” he told the Leader. “Cavan will be put on the back-burner for the next few months.”

When he said that, Mullinalaghta had just finished top of their group in first stage of the Longford championship. Theoretically, the end of the season could have been three weeks away, although given that they were going for three in a row, they’d have been expected to be involved for another month beyond that.

What nobody imagined, least of all Graham himself, was that he’d be sitting here just over five months later still the Mullinalaghta manager. That’s a hell of a back-burner.

The Cavan team to which his attention has been gradually transferred over the past 160 days kicks off their latest stint in Division One on Sunday against Galway in Salthill, after which he has Kerry in Breffni Park, Mayo in Castlebar, Dr Crokes in Thurles, Roscommon in Breffni, and Tyrone in Omagh, all on successive weekends.

“I went to the Mullinalaghta players when I was offered the Cavan job and the one thing I said to them was that nobody was to use it as an excuse if things go pear-shaped. Let’s finish the year on a high. But sure we never thought it would be still going this long!”

So this is his life now. Every hour of the day is a different spin of a different plate. He earns a living as a sales rep for Coca-Cola so he spends most of his time in the car, making calls, checking lists, crossing jobs off as he goes. When he took the Cavan job, the bulk of the sand in the egg-timer belonged to Mullinalaghta. As the months have passed, most of it has naturally passed through to the Cavan side.

“I have a schedule drawn up between now and February 16th [the date of the All-Ireland club semi-final against Dr Crokes], splitting time between the two and I’m trying to keep to it as much as possible,” he says. “It was a matter of sitting down with a pen and paper and looking at dates and working out what’s viable and what isn’t. They key was to make sure that both of them were getting the same commitment and that I’m not neglecting one or the other.

“It’s actually easier with the Cavan thing because you have a set-up there and you have plenty of good men around you – coaches, physios, medical team, co-ordinator, nutritionist, all that sort of thing. Then I have Dermot McCabe as well my assistant manager and he and I would be of the same mind on everything really.

“Whereas with Mullinalaghta, you’re kind of looking after everything. You’re looking after the football end of things, overseeing coaching, making sure the boys are eating properly, working out what plans they’re on, all that stuff.”

Whenever it ends with Mullinalaghta, he will pass the whistle onto fellow Cavan man Finbar O’Reilly and go about his business. He may even indulge himself and catch a glimpse of the family once in a while. But hectic and all as it has been, he wouldn’t change it for diamonds. Winning a Leinster title with a team from a half-parish of 400-odd people is the kind of thing that will outlast him, regardless of what happens from here. It’ll outlast them all.

The boys were blown away by it. They didn’t expect it at all. When the whole thing happened, when we won, everything was new.

When you write your name across the sky like that, everyone takes notice. Maybe a little too much notice, truth be told. Mullinalaghta’s success last December was their own, yet it got co-opted by the country at large as though it belonged to every underdog who never had a day. Which was all very well for those of us in the outside world, idly checking in on the feel-good story of the day to pass the time. To be in the middle of it was dizzying.

“The boys were blown away by it,” Graham says. “They didn’t expect it at all. When the whole thing happened, when we won, everything was new. RTÉ came down and did the whole live thing for the news the next day and we basically thought that was that.

“Letters, postcards, cards coming from everywhere – America, England, Kerry, Cork, everywhere. You were getting people writing to you telling you how much you inspired them, how small their club was and how little they had to work with but how they could see something to aim at in Mullinalaghta.

“The boys were just blown away. It got to the point where they were going, ‘Jesus, we can’t cope with this. Hopefully this will all settle down soon.’ It was nearly getting too much.”

Christmas was golden, all the same. On St Stephen’s Day, the whole squad did a charity run in the local forest and Graham kept them up to their work thereafter by organising a few nights of boxing among themselves. They’ve moved training around here and there to accommodate him with his Cavan duties but he’s not ready to be done yet. And in a way, the whole tiny club storyline is helping them still.

We’ve been written off in every game we’ve played nearly. Nothing new there.

“That’s what I said to the boys going into the Leinster final – people weren’t looking at what we had done, they were just looking at where we were from. Like, going down to Tullamore and beating Rhode there was a hell of a result. I honestly thought after doing that, our element of surprise would have been gone. But it wasn’t!

“And really, it’s still not gone. A fella rang me there recently, I know him from work and he’s from Kerry. He was in a bookies and he rang me and said, ‘Here, can this be true – ye’re 7/1 for the Dr Crokes game?’ And I said, ‘Aw, it’s true surely, I’d well believe it.’ But sure that’s the story of our lives. We’ve been written off in every game we’ve played nearly. Nothing new there.”

It will all be in the rearview mirror soon enough. The Cavan job is one he’s had his eye on since he started coaching in 2004. Graham had a decent but frustrating playing career with Cavan around the turn of the century, winning an Ulster title in 1997 without ever really kicking on from it. He was in the last Cavan team to play in an Ulster final back in 2001 – every other team in the province has appeared in at least one decider in the 17 seasons since.

He has been over junior and intermediate teams in Cavan in the past but always said he wouldn’t take a senior side while his brothers were still playing for Cavan Gaels. Before Mullinalaghta, he’d put down a few seasons managing Clonguish in Longford. All the way along, he hoped he’d get to a place where his road would intersect with Cavan’s eventually.

Here he is, then. And miles to go before he sleeps. Cavan may be back in Division One but you’d hardly describe them as being on an upward curve. Mattie McGleenan’s two years came and went with only three championship wins to show for them – and those were against Offaly, Wicklow and Down. They haven’t beaten a Division One team in summer football since a qualifier win over Westmeath in 2014. Cavan always seem to be starting over.

I said to them the first day I spoke to them – there’s no quick fix here. Things aren’t going to happen within six months or 12 months.

“Yeah, it just seems for the last number of years that there’s been a fierce turnover of players for various reasons,” Graham says. “Whether it’s the commitment or lads travelling or injuries or lads not believing that they’re good enough to go on and be successful, there’s been lots of reasons. It’s been disappointing that every year you seem to have a bunch of new players. From my point of view, I’m hoping to bring a bit of continuity

“I said to them the first day I spoke to them – there’s no quick fix here. Things aren’t going to happen within six months or 12 months. This is a journey that could take two, three, four years. To create the environment I want, to put the stamp on their set-up that I want, none of it is going to happen overnight.

“It’s a matter of the boys buying into it and seeing the bigger picture. For new lads in to develop as players physically and mentally, it could take a few years so everyone has to realise that. It’s going to be a tough year or two to begin. I firmly believe things will get worse before they get better, unfortunately.”

Nobody is expecting miracles – not right away at least.

His last one hasn’t finished yet, after all.