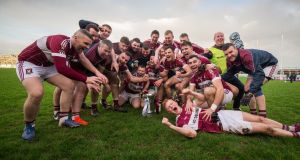 Be careful when identifying trends. Less than a month ago it was possible to discern the globalisation of the club football championship, and with it the inexorable domination of the big brands.

Based on the projection that the All-Ireland semi-finals would feature champions Corofin, Dr Crokes, Kilmacud Crokes and Crossmaglen Rangers, the argument ran that the club game was becoming as much of a cartel as its intercounty equivalent.

The weeks since have provided some reassurance with rare and historic provincial titles for the counties of Donegal and Longford.

Donegal has been underperforming at club level given that the county has won seven Ulster titles, one national league and two All-Irelands since taking its only previous provincial championship with St Joseph’s (featuring Brian McEniff and Martin Carney) in 1975. Gaoth Dobhair’s victory didn’t qualify as a total surprise, however, and certainly not in the same category as what came last weekend.

Mullinalaghta have won the last three Longford county titles, but given how strong a record Dublin clubs have in Leinster – eight of the previous 11 championships – the small club from the border with Cavan was quickly assessed as having done well to be the first side from the county to make a final but unlikely to cause an upset.

Their performance wasn’t some puncher’s chance upheaval because they were competitive throughout. Kilmacud were error-prone, but so were their opponents.

It was a win that had to be dug out of a tight low-scoring match played in wintry winds. And unlike the favourites, when Mullinalaghta got their chance they took it with both hands.

Many have made the point that the outcome serves as a headline for all clubs around the country. If a population of fewer than 450 can overturn such extreme disadvantages of tradition and population, then who can’t aspire to doing so?

It also came like a seasonal light at the end of a football year sound-tracked by murmurs of unease at the growing distance between the game’s elite and its supporting cast. Yet there it was, on the last big competitive day in the calendar – proof that ultimately it is about 15 players against 15 others.

Bookmakers and the brassy calculations by which they must live are not romantics, and the pricing distance between the two most recent champions Corofin and Dr Crokes and their respective semi-final opponents Gaoth Dobhair and Mullinalaghta warns that real-world expectations haven’t significantly shifted.

Yet the recent weekends have been just what the club championship has ideally been about for most of its nearly 50 years of official history – not necessarily David sling-shooting Goliath (although that as well) but the sense of a great honour being shared around, with only a small minority of clubs able to regenerate and challenge on a regular basis.

In Leinster, for instance, only three counties have yet to win a provincial club football title, Louth, Kilkenny and Wexford – ironic given that the All-Ireland trophy is named after the late Castletown and Wexford footballer Andy Merrigan, whose club donated the eponymous cup.

That ideal sends a specific message. Somewhere around the country are club catchments which without explanation or warning fire up a generation of particularly talented players – or in Mullinalaghta’s case a critical mass of male children.

Painstakingly developed and nurtured, they may grow to give their community a place in the spotlight that reflects pride on all concerned, fires the imagination of local children, and intensifies bonds with those from home scattered elsewhere on this island and planet.

The spotlight will inevitably move elsewhere, but its glow will bathe each parish and half-parish that it touches in perpetuity.

Another lesson to ponder is the importance of provincial competition.

The club championships are based on the old All-Ireland championship structure of four provincial champions meeting as equals to decide the destination of the ultimate prize. For all the successes of the intercounty qualifiers, they lack that – for want of a better word – backstop.

I remember talking to people in Fermanagh in 2004, and being faintly surprised at how vehemently they said they would prefer to have won Ulster than be in an All-Ireland semi-final. The two achievements used to mean the same thing, but under the new dispensation they would still prefer to have won a title than amorphously to have reached the “last four”.

For Mullinalaghta and Gaoth Dobhair there will be a permanent memorial for their ground-breaking seasons in the Leinster and Ulster trophies.

It is likely that at some point in the future the GAA will switch the club championships to a calendar-year season, and that makes sense for all concerned. The only quibble may come from a Mullinalaghta or a Gaoth Dobhair, for whom this is about to be such a memorable Christmas as champions of their province for the first time.

The achievement can linger rather than being played out in a matter of weeks as the All-Ireland concludes in just one winner.

For now in the two communities in question the seasonal celebrations are spiced with achievement, and as the old year dies after the winter solstice they will look through the brightest of eyes at the new beginning and imagine what further adventure awaits in 2019.

Regardless of what comes to pass, it is a time they will never forget.