Wexford were unrecognisable from last year. Even Davy Fitzgerald was quiet 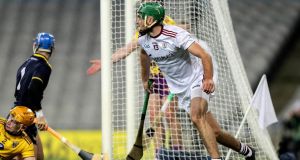 If we wondered what Galway would bring to the 2020 winter, their answer surely didn’t want for heat. They shouldered Wexford aside in Croke Park with a dominant display, spearing points from all distances and angles and not even really needing much of a shift from Joe Canning to do so. Early days, obviously, but theirs is unquestionably the most convincing performance so far.

After all the craft and grit that Wexford showed in winning their Leinster title in 2019, it was a shame that they gave it up here in such a wan fashion. They went stride for stride with Galway for most of the opening half hour but dissolved from the point onwards. They were unrecognisable from last year. Even Davy Fitzgerald was quiet on the line. Most unlike them.

For a while, this was like a lot of hurling matches are these days. Careful and stop-start, like a frame of snooker where both players know that one bad safety shot will leave the other in for a bout of heavy scoring. Not that there’s anything wrong with that, of course - some of our best friends are snooker players, etc. But it all gets a bit samey after a while.

The teams were level five times in the first 25 minutes, going score for score, free for free. Lee Chin was winning his battle with Gearoid McInerney at one end of the pitch, Conor Whelan was running a drag with Joe O’Connor at the other. The difference as the half wore on was that Whelan got help from the Galway players around him whereas Chin was paddling his own canoe a lot of the time.

After the sides went to the first water break level at 0-7 apiece, the game needed spark to match the fireworks that were crackling all around the neighbourhoods of Dublin’s northside. Whelan provided it, first skating onto a Cathal Mannion pass to blaze a good goal chance over and taking a huge catch soon after to go through again.

This time he buried his shot to the net, only for referee Colm Lyons to pull him back for a Galway free. Canning went for goal, it was cleared out for a 65 which Canning duly pointed. It was a lot of huffing and puffing for a regulation point but suddenly Galway were three clear.

They doubled their lead on the half-hour, as Brian Concannon bundled in a scruffy goal at the Canal End. A long-range Canning free dropped in the Wexford square and when Mark Fanning and his full-back line didn’t deal with it, Concannon was on hand to scoop it over the line. It took the Galway corner-forward to 1-3 for the half, fair reward for an enterprising display.

It was the squeeze on the accelerator Galway needed. Wexford hit back with a fine effort from Paudie Foley but Cathal Mannion answered immediately with his first of the night. It all added up to the sides going in with six between them at the break, Galway 1-13 to Wexford’s 0-10.

As it turned out, that little spelled killed the game. It shouldn’t have - six points was a slightly unjust margin, bolstered by the sloppy goal. A quick start from Wexford after the break and there ought to have been plenty in the game. But truth be told, they didn’t really come out for the second half.

Chin cut the gap to five with an early free but Galway reeled off the next three in a row. Jason Flynn got on the scoresheet with a strong run through the middle and Whelan followed up with his third of the night.

Wexford were wasting possession at every turn now. Galway were like an NFL defence, stacking the box and stopping Wexford’s runners through the middle at every opportunity. Whelan’s point came from a turnover in a centrefield that looked like the Red Cow roundabout, Johnny Coen nabbed one soon after from a similar scenario. Concannon swished another, Cathal and Pádraic Mannion nailed one apiece and just like that, Galway were 1-20 to 0-14 ahead.

A sure indication that Wexford’s running game was coming to nothing was the fact that Liam Óg McGovern and Diarmuid O’Keeffe were both sitting in the stand by the 50th minute. The flying columns that made Wexford such an innovative force en route to last year’s Leinster title were taken out at the knees. Galway simply weren’t allowing them run through the centre and Wexford had no workable Plan B.

And so Galway proceeded to fill their boots. By the end of the night they had 10 different scorers. Shane Cooney got forward for a point from wing-back, Seán Loftus ended with two against his name, a tally to match his shirt number. Canning had a quiet game but still found room for an eight-point haul, one of them a sublime sideline ball from all of 50 metres out on the right.

On Halloween night, you could just about hear the ghosts of the Cusack Stand rise to greet it as it split the posts. Galway sail on to meet Kilkenny in the Leinster final. Wexford go down the road knowing that if they don’t shake themselves soon, there’ll be nothing to shake themselves for.