Brian Cody relieved as Kilkenny scrape over the line 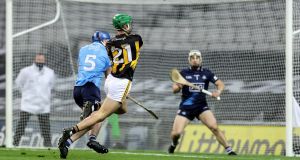 Kilkenny’s Alan Murphy scores what proved to be the game’s winning point against Dublin in the Leinster semi-final at Croke Park. Photograph: Laszlo Geczo/Inpho

Words you don’t expect to hear from Brian Cody.

“We were hanging on at the end,” confessed the Kilkenny manager to a backdrop of his players – socially distanced behind him in the lower Cusack – banging their boots in an old-school cleansing exercise.

The greater soul-searching would involve how they very nearly let a 15-point half-time lead over Dublin disappear in as strange a Leinster hurling semi-final as you’ll ever see.

Nobody could have envisioned such drama as the first half saw Kilkenny outhurl Dublin in every department, demonstrated by a half-time scoreline of 3-13 to 0-7. The result appeared to be a foregone conclusion.

Two of those Kilkenny goals arrived within 60 seconds of each other in the 14th minute: both of them had a hand from TJ Reid, who firstly pick pick-pocketed a ball from Dubliner defender Eoghan O’Donnell who hardly knew he’d been lifted before Reid swiftly transferred the sliotar to Colin Fennelly who fed Billy Ryan and it was lying in t he back of net with seamless brilliance from one pass to another and then the finish.

Within a minute, Kilkenny bagged a second goal, this time Reid outpacing James Madden after a high ball inside was broken down and then finishing brilliantly to the net with Dublin goalkeeper Alan Nolan hearing it whizzing by.

Kilkenny’s third goal arrived in additional time, and ultimately it would prove to be their lifeline even if at the time it only showcased Kilkenny’s ability to punish Dublin mistakes.

However somehow Dublin were a team transformed in the second half. Kilkenny too, but not in a good way.

The introduction of substitutes Eamonn Dillon and Ronan Hayes provided the stimulus for change while Donal Burke’s fee-taking was again exemplary as Dublin punished Kilkenny’s fouling.

While TJ Reid ran the show in the first half, his influence faded and Dublin diligently ate into the deficit with Burke the scorer-in-chief. It seemed to be a case of attempting to earn respectability but it proved to be more than that as a brilliant Hayes goal in the 58th minute was followed by a Chris Crummey goal that reduced the deficit to four points.

Then a free from Burke, two points from play by Dillon and another long -range effort from Gray saw Dublin back on level terms, 2-21 to Kilkenny’s 3-18 as the game entered added time. Kilkenny relied on Alan Murphy and then a fine individual effort from Lawlor to regain the lead before Burke made it a one-point game as Dublin came up just short after a Herculean second-half effort.

“Kilkenny punished us severely for our mistakes [in the first half]. In fairness to the guys, we regrouped at half-time and put in a really good performance. The fight they showed, the character they showed, the attitude they showed, was exceptional,” said Dublin manager Mattie Kenny, with his team redirected to the qualifier route.

Cody found it hard to comprehend his own team’s reversal in form between the two halves.

“A big lead can be a dangerous thing,” he mused. “I can’t say for certain. Who knows? They won the battles, won the basics of hurling. In the first half we were very, very good . . . . the object was to get to the Leinster final and we are in it!”