White-hot Kildare stand their ground to send Mayo crashing out 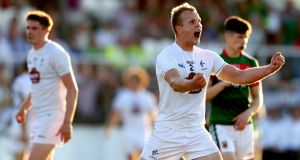 Somewhere between the dead heat and the white heat of the battle there simply was no surrendering, Kildare holding out and with that sending Mayo crashing out – and suddenly it felt like every inch of home ground under their feet at St Conleth’s Park was counting.

In the still lingering heat of the evening Kildare finished with such a hot wave of attacks Mayo could do little to survive it, trying to hold out bravely in a game that lived up to it sell-out billing in every sense – and surely would have been at least a little lost in Croke Park.

In the chaotically nervous ending, which included seven minutes of injury time, a free from Neil Flynn and replacements Niall Kelly and Eamonn Callaghan eventually sent Kildare marching through to round four qualifier and the last 12 of the championship – and sent Mayo out, the team that lost four of the last six All-Ireland finals.

In those seven minutes of injury time – wherever they come from – Mayo lost Aidan O’Shea to a second yellow card but by then it hardly mattered: level on 55 minutes, Kildare got their noses in front and kept it there until the end, Neil Flynn’s free-taking counting a good deal, plus those late scores from Kelly and Callaghan.

Mayo got it back to a single point on 70 minutes, Paddy Durcan adding his fourth, but even with their old reliable players on the field Mayo couldn’t get through: Andy Moran hit the last score with from a 20-metre free but by then it was a goal they needed to snatch the draw and force extra-time, but it just wasn’t to be.

Level going into second half, nine points each and no shortage of chances either, Mayo’s experience at this stage of the summer counted for nothing. Kildare finished with nine different scorers, urging each other on with each one, the excellent Paul Gribbin finishing with four points, Daniel Flynn two, and Neil Flynn 0-8, seven from placed balls. Kevin Feely and Tommy Moolick also made every bit of their presence felt at midfield.

Kildare’s enthusiasm was visible, no doubt further buoyed by events during the week when first deprived of home advantage, the game fixed for Croke Park instead, only for Kildare manager Cian O’Neill to hold his finger to the nuclear button for 48 hours, insisting it was “Newbridge or nowhere”.

Still 24 degrees at the 7pm throw-in, all 8,200 match tickets reportedly in greater demand than the county’s water supply, there was ample space nonetheless; even with three-to-one more season-ticket holders Mayo only slightly out-numbered the Kildare support.

Traffic, what traffic? Supporters did queue outside for over two hours before throw-in, but with no animosity whatsoever – except for the slight tension at the ice cream vans.

Kildare came in after ending their nine-game losing streak with qualifier wins over Derry and Longford and they started the brighter here, making the most of that home advantage to out-score Mayo seven points to two in the opening 17 minutes, Feely, Neil Flynn and Paul Cribbin all off their marks, Flynn deftly placing all four of his placed balls. Daniel Flynn had the one close-up goal chance too, well saved by David Clarke.

Mayo made one enforced changed, Séamus O’Shea out for the season and Diarmuid O’Connor in instead, although with Aidan O’Shea taking up midfield. Their early shooting was poor, strangely their enthusiasm too, but inspired from the back by Durcan, Colm Boyle and Lee Keegan they suddenly tore through Kildare’s midfield, hitting the next six points without reply to ease a point in front, the four frees from Cillian O’Connor an indication of Kildare’s slacking discipline.

Andy Moran’s first point was cooler than the evening breeze and Kildare were struggling to stay at their pace. After 14 minutes without a score they levelled it again thanks to Gribbin, another exchange of points and they were level again as they headed inside for the isotonic drinks and ripe bananas.

Momentum swung back and forth, Kildare going two points clear on 57 minutes, thanks to wing back Johnny Byrne, before it all boiled up properly for the decisive minutes. The heat on the field was felt for a long time afterwards too as the home support embraced their team in the moment of a home victory.

So it’s Kildare who go into Monday’s live draw for Round 4, along with Armagh, Monaghan and Tyrone, to be paired with the four provincial final losers; Roscommon, Cork, Fermanagh and Laois. All Round 4 fixtures are played next weekend, at neutral venues, so no need for any nuclear buttons. Who would want to come to Newbridge this weather anyhow?