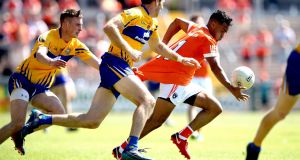 Armagh’s Jemar Hall is held back during the All-Ireland Senior Football Championship qualifier against Clare at the Athletic Grounds in Armagh. Photograph: Ryan Byrne/Inpho 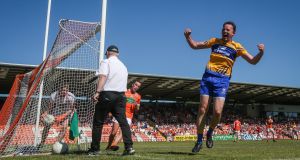 Clare’s David Tubridy converts a penalty at the second attempt during the All-Ireland Senior Football Championship qualifier against Armagh at the Athletic Grounds in Armagh. Photograph: Ryan Byrne/Inpho

Armagh produced a Lazarus-like recovery at the Athletic Grounds on Saturday to storm into round four of the All-Ireland qualifiers after it had looked like that the curtains were being drawn on their season by Clare as they led 1-15 to 1-12 with a minute of normal time remaining.

What occurred in that pulsating 60 seconds and in the unexpected seven minutes of added time that was played by referee Fergal Kelly will live long in the memories of the Armagh faithful in the 5,429 crowd.

From seemingly cruising towards an extended championship run, Clare were not so much halted in their tracks as blown off course completely.

In the most explosive eight-minute spell enacted at the Orchard County citadel in decades, Kieran McGeeney’s side scored 1-4 without response, underlining the rich vein of talent that inhabits their substitutes’ bench and reminded those teams which will go into Monday morning’s draw that their renaissance is in top gear.

A team that had trundled through the first half, shooting 11 wides in the process, and which found Clare’s blistering pace and clever technique difficult to combat in the blistering heat, gained new-found belief when their championship warrant seemed to have been signed.

That was in the 69th minute when substitute Joe McElroy complemented Andrew Murnin’s 55th-minute goal with a peach of his own to haul Armagh back up off their knees, David Tubridy had sent the Clare fans delirious when he rammed home his penalty at the second attempt.

Yet far from pressing home their advantage, Clare inexplicably lost their shape, their nerve and their hunger as McElroy’s goal was followed by points from Gavin McParland, Ross McQuillan and Aidan Forker as Armagh roared down the final furlong.

Clare, enterprising and creative in the first half with Tubridy, Jamie Malone and Eoin Cleary punching holes in the Armagh rearguard, were left flat-footed as their hosts thundered to an unlikely victory.

McGeeney, who had earlier been barking desperation orders from the touchline, afterwards hailed the courage and character of his side.

“I thought that this performance was in the players. Clare were the best team we have played all year, there is no doubt about that and we found it very difficult in the first half, but I suppose you could say that we contributed to our own problems by shooting so many wides.

“The fact that we came back so well says much for the team. I have been saying for some time that they are a young side but they are now maturing.”