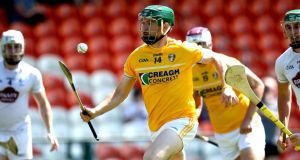 Both sides had expressed their opposition to playing the game at all, questioning the logic of the new second tier championship being reduced to five teams for 2019. However, when the sliotar was thrown in, both sides got on with it and it was Kildare who led early on after Paul Divilly found the net after three minutes.

Antrim then found their rhythm, and goals from Neil McManus and Conor McCann helped them to a 3-9 to 1-9-half time lead, while Nigel Elliott forced Kildare goalkeeper Paddy McKenna into action on two occasions.

Kevin Whelan reduced the gap after the restart but Antrim accounted for eight of the next 10 points as the Ulster side put the game beyond reach.