Tyrone make heavy weather of it against Cavan 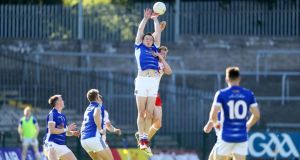 Favourites Tyrone survived a minor scare from Cavan to march on with what in the end was a relatively-comfortable three-point win over Cavan in this qualifier match at Brewster Park.

Ahead by 0-9 to 0-5 at half-time, Tyrone stretched that lead to five points on the restart but were rocked by a 1-2 salvo from Cavan early in the second half, the goal coming from defender Martin Reilly and the points from the impressive Gearoid McKiernan.

Try as they might, though, Cavan were unable to take the lead and Tyrone drew on their experience when it was needed, putting together some neat moves to keep the Breffni men at arm’s length in the final quarter.

Tyrone started the brighter and were 0-4 to 0-1 ahead after nine minutes, Mattie Donnelly, Peter Harte (free), Niall Sludden with a long-range beauty and Tiernan McCann supplying their scores with Ciaran Brady on the mark for the Blues.

Cavan settled into the contest, though, and turned the tables on Mickey Harte’s men. With Sean Johnston threading some decent ball inside, they reeled off three in a row from Dara McVeety, Killian Clarke and McVeety again to draw level.

A 45-metre Frank Burns effort was cancelled out by another from McVeety but Tyrone owned the final 15 minutes of the first half. Cavan, defending deep and no longer pushing men forward, found themselves struggling to create scoring opportunities and points from Cathal McShane, McCann, McShane again and Donnelly - all of them after turnovers - left four between them at the break.

Connor McAlliskey opened the second half scoring with a free but a brilliant tackle from Killian Brady denied the Red Hands a certain goal and Cavan visibly grew in confidence. A free from McKiernan got the scoreboard ticking over again and then when Martin Reilly rose to flick a Conor Bradley delivery to the net, Cavan were back within one.

Better was to follow when the excellent McKiernan fielded the resulting kick-out and fired over an inspirational score to draw them level at 1-7 to 0-10. Asked a big question, the 2017 Ulster champions responded in style.

Ronan O’Neill kicked a free and McCann released Sludden to waltz through to put two between them again.

Again, Cavan replied through Oisin Kiernan and a superb score from Johnston - possibly his last in a Cavan jersey - to tie it again entering the home stretch but Tyrone would outscore the underdogs 0-6 to 0-3 in the final 15 minutes.

Richie Donnelly and Conor Moynagh traded scores but Tyrone had more energy about them by now and points from O’Neill (two), Burns, Harte (free) and Sludden helped them ease home, with McKiernan - Cavan’s best player on the day - grabbing two at the other end.