Monaghan not forced to break sweat against Leitrim 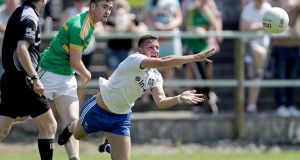 Monaghan’s Ryan Wylie gets a pass away under pressure from Ryan O’Rourke of Leitrim. Photograph: Laszlo Geczo/Inpho

Monaghan outclassed a battling Leitrim side to win their Round 3 qualifier convincingly at a sun drenched Carrick-on-Shannon on Saturday.

The teams looked evenly matched in the opening quarter, when Leitrim put it up to the Farney men but Monaghan did get a toehold as Conor McManus found his range from a from free and play while Conor McCarthy also chipped in with a point.

Leitrim’s Jack Heslin then fired over two Leitrim points while Emlyn Mulligan drew the sides level with his first score of the game. But when Fintan Kelly score a Monaghan point in the 19th minute it game them a lead they would never surrender.

After Kelly’s score, Monaghan added five unanswered points by the 31st minute with McCarthy hitting the target from both play and a placed ball while McManus (free), Rory Beggan (‘45’) and Karl O’ Connell all added a point each.

Before the break Leitrim’s Ryan O’Rourke and Monaghan’s McManus traded points with Malachy O’Rourke’s side leading by 0-10 to 0-4 at the interval.

After the restart Monaghan continued to outgun Leitrim and raced further ahead points from Colin Walshe, McManus and Beggan (‘45’).

Leitrim managed to reduce the deficit slightly with points from Ryan O’Rourke and Paddy Maguire but the visitors stayed in complete command and were never really threatened, O’Rourke afforded the luxury of brining in six second half substitutes as his got a run out.