Doubts persist about Cork despite unbeaten streak in Munster 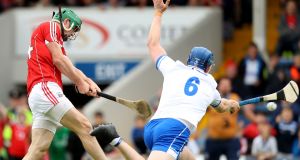 One of the few downsides to the round-robin part of the hurling championship was the sheer speed at which everything passed in front of our eyes.

In the month of frenzy that began with Liam Rushe bullocking his way around the Kilkenny defence and ended with Patrick Horgan smiting Waterford at the death, there was barely a minute to draw breath. It was a quart poured into a pint pot – no one had time to pay any heed to the stuff that spilled out over the side.

It is no major surprise, then that when Cork did finally overcome Waterford in those harum-scarum closing minutes in Thurles two weeks ago, there was no big deal made out of the fact they had now gone seven matches unbeaten in the Munster championship.

Three wins from three to take the title in 2017, two wins and two draws this time around. The last time they lost a game in Munster, Enda Kenny still had a year to go as Taoiseach.

To put it into some manner of context, only eight teams in the 130-year history of the competition have put together longer streaks without a defeat – and three of those were able to open their pipes against Kerry somewhere along the way.

Cork, by contrast, have put their run together in a time of across-the-board competitiveness in the province. In a summer where anyone could beat anyone in Munster, nobody beat Cork.

Streaks like this are much more a Leinster Championship kind of thing. This is the first time a Munster team has gone seven matches unbeaten since Ger Loughnane’s Clare team did it in the late 1990s. Whereas in Leinster, it’s been done four times in that period alone, including by the current Galway team, who have won seven straight going into tomorrow’s final against Kilkenny.

John Meyler’s side are in rarefied company, then (see accompanying table). And yet, it’s clearly more than just the accelerated nature of the new format that means they aren’t regarded in anything like the same league as the others.

Unlike the rest of those teams, they don’t have an All-Ireland title to their name but that’s not it either. This summer isn’t over yet and they are second favourites to lift Liam MacCarthy so it’s not an entirely fair comparison in any case.

Instead, it’s a simple reality that Cork haven’t convinced everyone of their bona fides just yet. Possibly it’s because they started last year’s provincial campaign as outsiders of five, available at a thoroughly backable 10/1 before the start of play.

When you’re that unfancied at the beginning, it can be difficult to convince people as you go. Even though they won Munster, nobody would have made an argument for them finishing 2017 as the province’s best team – Waterford and Tipperary were both ahead of them.

It’s slightly different this time around. Cork avoided defeat throughout the round-robin stage but it would be just as accurate to say that on a couple of occasions, what actually happened was that they avoided victory. Those big leads coughed up against Limerick and Tipperary are the shadow on any X-ray of their campaign. Until Cork can explain how they came about and convincingly remove their threat, it’s only natural to fear for their future.

“One of the goals we set for the squad is that we want to become a championship team,” selector Donal O’Mahony said at their pre-Munster final press event. “What we meant by that is we didn’t want to get to a Munster final one year and then do nothing.

“I know there’s expectation but we just have to be patient. There are a lot of young fellas there and to make the step up to senior level is massive. We’re trying to explain to them, ‘You’re going to have bad games but we’re not going to throw you to the side, we’ll trust you and stick with you’.

“You could see a bit of that in the under-21 game [against Waterford], where the likes of Darragh Fitz and Shane Kingston were after a tough six weeks, a lot of games. You just have to trust them because they are good enough but they’ll have dips in their form and come back again.”

Question is, are they going into this Munster final in the belly of a dip in form or on the upswing out of it? Since their ultimately comfortable opening-day win over Clare, Cork have drawn two games they should have won and been put to the pin of their collar by an already-eliminated Waterford. Their unbeaten record counts for nothing in Thurles tomorrow.

It has certainly counted for very little in the build-up. Cork’s recent record against Clare is, to put it mildly, a little lop-sided in their direction. Not only have they a win over them already in this year’s championship, they were never in any particular trouble in last year’s Munster final.

In fact, they haven’t lost to Clare since the replayed All-Ireland final in 2013, a result that stands as Clare’s sole victory in 13 championship games against them since 1998.

Despite such a comprehensive record of superiority, both recent and historic, nobody is claiming this final to be anything other than a coin-toss. Bookmakers have it as more or less a pick-’em – the green lads have Clare as slight favourites, the blue chaps go for Cork. Nobody knows, one way or the other.

That in itself is a poor reflection on Cork’s credentials. Defending champions, unbeaten in two years in Munster, one defeat to Clare in two decades. And still the doubts are legion.

Only one way to fix that.

Hatton roars clear in Abu Dhabi as McIlroy’s game deserts him in the dessert 15:31
Manchester City’s Kevin De Bruyne ruled out for up to six weeks 14:33
Angelo Mathews stands up to England attack as Sri Lanka hold firm 15:44
Conor McGregor feels like he’s ‘only starting’ in UFC career 13:02
TG4 to show matches and highlights from AFLW 12:40
Crossword Get access to over 6,000 interactive crosswords