Dublin too good for defending champions in Leinster minor final 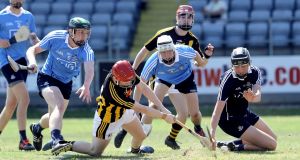 In truth, the winning margin failed to reflect their general dominance as they conceded two goals in injury-time that put a less flattering outlook on the scoreboard.

There was a thrilling start to proceedings as the holders built up a seven-point lead by the sixth minute with George Murphy netting from close after an error from Dublin full-back Eoin Carney. Matters then deteriorated for the Dubs as Killian Hogan showed great composure to rattle home Kilkenny’s second goal.

Crucially, Dublin responded immediately to this double blow with Liam Dunne racing clear to crash home past Jason Brennan in the eighth minute and a second goal arrived just a minute later as Luke Swan fired home after a superb run by Ciaran Foley.

The holders were all at sea defensively during this period and it was scant surprise to see Dublin add a third goal in the tenth minute as Conor Murray raced through unopposed to rifle a shot beyond the helpless Brennan.

Three points on the bounce fom Donal Leavy, Dunne and Murray pushed Dublin three points clear as the half evolved but they were pegged back in the 20th minute as Cian Kenny waltzed through to angle a low shot past Jack Lambert.

A brace of Dunne frees looked to have given Dublin a marginal lead by the break but some further defensive lapses culminated in Cathal O’Leary kicking home from eight yards to give Kilkenny a narrow 4-8 to 3-10 interval advantage.

Any thoughts that defences would tighten up upon the restart proved unfounded as Dublin picked up where they left off thanks to goals from Swan and Dunne inside the opening two minutes.

Conor Kelly replied with a cracking goal of his own in the 37th minute but once Swan completed his hat-trick a minute later, Dublin’s triumph looked inevitable.