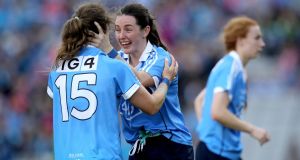 Dublin’s Noelle Healy and Lydsey Davey celebrate at the final whistle after the victory over Mayo in the All-Ireland final at Croke Park. Photograph: Ryan Byrne/Inpho

There’s a terrific moment in the early minutes of Cormac Hargaden’s film on the Dublin ladies football team, Blues Sisters.

It’s half-time in their Leinster championship match against Laois in Timahoe. A piece of A4 paper with ‘Dublin’ written in marker is taped to the outside of the door where two little girls are eavesdropping trying to hear what their father, team manager Mick Bohan, is saying to the team at half-time. It turns out that what he is saying is pretty blunt: “The day you decide to play the game on your own, you don’t play.”

There is no immediate threat in this particular match: Dublin crush the opposition 8-13 to 2-03. What Bohan is trying to guard against, in his first year in charge, is what he describes as the “unquantifiable damage” caused by the team’s losses in the three consecutive All-Ireland finals.

They were in a perilous place; clearly one of the best teams in the country but also deeply uncertain as to whether they ultimately knew how to make that count.

It made their decision to allow a film crew to trail them for a full season all the more brave and ultimately rewarding. An attendance of 46,000 turned up in Croke Park to watch Sinéad Aherne lift the Brendan Martin cup after delivering in their fourth attempt against Cora Staunton’s Mayo.

If Staunton is the enduring icon for women’s football – simply one of the Gaelic Games’ most important players, irrespective of gender – then the emotional city reaction to the Dublin ladies team promises to usher the sport onto a higher platform of awareness and appreciation.

This documentary deepens the sense that ladies football is on the cusp of a very bright future. For years, players and county teams have fought against the sense that they are second-class citizens. Meagre training facilities, little funding and awkward match scheduling in peripheral grounds has been part of their lot.

By surviving and growing, they have fought a thousand small battles for recognition. Part of the issue was gaining acceptance in what was traditionally a male sport. It’s well known that when Staunton started playing the game as a kid in Mayo, she had no choice but to play on the boys’ teams in her school.

But the same was true of Nicole Owens who grew up in Malahide and recalls in the film the disdain of opposing players upon seeing a girl on the field in U-12 games. “There’d be all this, “at this is going to be so easy” and then I’d have elbowed them and run off with the ball or something.”

Blues Sisters was directed by Pat Comer, whose pioneering GAA documentary A Year Til Sunday approaches its 20th anniversary. That was an intimate portrait of a world he knew well: a season with a Galway team on which he played. This was different.

“Ladies football....I hadn’t a clue about it, really,” the Galway film maker says.

“I knew of Cora Staunton. The Cork team. I might have known of Sinéad Aherne and Sinéad Goldrick but most of the Dublin players I didn’t know. I’m sure it is the same for most people. Cormac approached me with the idea and they were absolutely great.”

His months spent trailing the squad and hearing their stories caught him unawares because the intensity of effort is equivalent to the men’s teams while the satisfaction that comes with it is almost entirely drawn from within.

“They reminded me about the purity of the game. They are in it for all of the right reasons and more so because they are not known. The fellas game...there is always a big crowd there for the first round. There were maybe 100 people at their games in the early rounds and you see this level of commitment they are giving and they bring this incredible passion to the game. It’s the same with the fellas but for them, it is acknowledged.”

Behind Dublin’s championship saga there is the day-to-day lives of the players. Owens talks with admirable honesty about the importance of the squad as she has fought against ongoing depression while playing for the county.

Family bereavements and the common GAA problem of work and sport commitment are touched on in a story that flies by. Like many good sports documentaries, Blues Sisters feels as if it could do with another 90 minutes of screen time to fully address some of the themes raised and to get to know the people featured.

Bohan comes across as a terrific coach, wonderfully brisk –“They react to an instruction like tomorrow it’s supposed to be done” – and tough on occasions but hugely respectful of the effort his players give. As it turned out, the actual completion of finally winning the All-Ireland involved a cascade of late goals and a complete reversal to their nightmarish experiences of the previous three years.

As Bohan remarked at the beginning, part of their problem was that they were beating themselves.

But the film represents a significant step forward for the women’s game.

Lidl’s decision to sponsor the LGFA led to a series of clever television adverts which instantly raised the profile of the ladies football. This year’s All-Ireland final attendance was a staggering 46,000. Among the supporters were members of the Dublin senior men’s team, who had won their final, also against Mayo, a week earlier. What struck Comer, though, was the number of youngsters in the crowd “who just see the players as footballers for Dublin rather than fellas or ladies”.

That may be the true significance of this documentary. The first ladies All-Ireland final was played in Durrow in October 1974, the beginning of a slow march to its current incarnation. But it’s still a young sport and in that sense the players in Blues Sisters are pioneers for a generation of girls who may find the path a little bit easier when their turn comes.

1 Welcome to Iten in Kenya – home of champions and cheats
2 Saracens to accept second 35-point deduction and effective relegation
3 Sonia O’Sullivan: How did Melbourne become the world’s most polluted city?
4 How do Klopp’s Liverpool measure up against greats of past?
5 Johann van Graan makes two changes for Munster’s last stand
Real news has value SUBSCRIBE