Jackie Tyrrell: Do Kilkenny or Wexford fancy dining in hell? 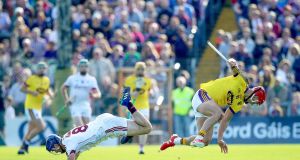 Galway’s Johnny Coen with Lee Chin of Wexford during Round 4 of the Leinster championship at Wexford Park. Photograph: Tommy Dickson/Inpho

After the Wexford versus Galway game on Saturday evening I found it interesting that Davy Fitzgerald’s take was “this will stand to us when we meet them again later on”. It reminded me of Anthony Cunningham, who said something similar as he shook Brian Cody’s hand after the Leinster final in 2012.

At what stage Fitzgerald hopes to meet Galway only he knows – it could be the Leinster final, it could be the All-Ireland semi-final. He might even have met them three times by the time August is over.

It adds an extra dimension to Saturday night’s game in Nowlan Park between Wexford and Kilkenny. Ordinarily you’d say it’s a classic Leinster semi-final. A huge game for both teams, local rivalry on the line, their fourth time meeting in 2018. Wexford licking their wounds after the league semi-final defeat and last weekend’s roll-over to Galway. Kilkenny needing to bounce back in front of their own people after being outhurled in Salthill.

So everything is in place for a humdinger of a game. But I just wonder will it turn out that way, given the long road up ahead for both teams regardless of the outcome.

I know both managers will be demanding 100 per cent effort from all their players, and if they sense any bit of weakness or lapse in concentration or commitment they’ll whip them off. But you’d have to imagine that it’s somewhere in the back of players’ minds that a Leinster final against Galway isn’t exactly an enticing prospect.

One thing is certain – this championship is putting a mental strain on players that is nothing like they’ve ever had to deal with before. From talking to a few players on different teams, the week-after-week-after-week schedule is a killer. Game Sunday. Recovery Monday. Meeting Monday night. Training Wednesday. Training/team meeting Friday night. Game Saturday or Sunday. Go again Monday. And again the following Monday.

This is Wexford’s fourth game in 20 days. Every year before now four games was enough to win you an All-Ireland, or even just to get you to a final, and you got to spread them out over three months. You had time to get up for games and time to wind down after them. Now you hardly have time to wash the dirt off your boots.

Players knew this would be a big challenge, but some of them have been surprised by how big it has turned out to be. You’re having to look forward to the next game even though you’re not ready to look forward because you haven’t fully processed the one just gone.

But you know you have no choice in the matter because the one thing you don’t have is time.

That’s why the bye week is a major advantage for any team going into a game. After the Galway game Kilkenny did a recovery session on the Monday and then didn’t train again until Thursday. They were able to get away from it all, let it wash off them, not force it.

On the flipside, let’s say you’re a Wexford player going to Nowlan Park on Saturday night. You haven’t had a day off from hurling for 20 days straight. You haven’t been able to not think about it. Physically you’re doing fine. But mentally you’re possibly starting to fray around the edges.

Are you really and truly going to be killing yourself to beat Kilkenny? I’m not so sure. Especially when the “reward” for a win is a three-week break before facing Galway in a Leinster final.

Compare that to the “punishment” for a defeat – a four-week break before playing one of the Joe McDonagh Cup teams in a preliminary quarter-final. I’m not saying anyone is going out to take a dive, but if Kilkenny got an early goal like Galway did last weekend, you’d imagine Wexford could find it hard to dig all that deep for a comeback.

Galway’s performances have been so dominant. They’re swatting teams like flies. They’re turning up, paying their respects and showing exactly why they’re champions. There’s an authority to their play as though they’re trying to rid the world of any doubt as to what they’re about.

Look at the change in their goalscoring habits just as one example. They spent the winter hearing people go on about the fact that they won an All-Ireland without scoring goals. I don’t think it’s any accident that they’ve scored the first goal in each of the three games they’ve played so far. It took five minutes against Offaly, 90 seconds against Wexford. Fair enough, they had to wait 24 minutes against Kilkenny, but only because Brian Concannon had one disallowed after eight minutes. You want goals? We’ll give you goals.

Everything about them screams defiance – and defiance from a position of power puts the opposition on the back foot straight away. I even loved the way they stood for the Anthem last week. The sheer bulk and size of them was a sight to behold. It reminded me of the film 300, as specimens of men stood there about to do damage and inflict pain to those who stood in their way. As King Leonidas bellowed out: “Spartans! Prepare for battle! For tonight, we dine in hell!”

Do Kilkenny or Wexford really fancy the thoughts of dining in hell three weeks from now?

I know this for certain – standing in the dressing room, waiting to go out, every last one of them will love the idea of it. They’ll want it with every fibre of their being. They’ll be bursting to go out and win the game and whatever Galway have in store, bring it on.

But I also know this – if you’re in a game and find yourself going seven or eight points down and you’ve been playing three or four weeks on the trot and the result isn’t the be-all and end-all for your season, it’s only human nature for you to run out of gas.

Kilkenny had last weekend off, so I expect them to be fresher. That makes a Wexford fade-out the more likely scenario. Saying that, I wouldn’t be putting the house on it either.

Brian Cody only knows one way, and he only wants to know one way – you go out and you win the game, and then you get ready to go out and win the Galway game too. The idea of being better off not playing Galway at this stage of the summer wouldn’t occur to him and wouldn’t interest him.

Cody is on the sideline, though. The game happens on the pitch, in the hundreds of small, spilt-second decisions made by the players. Those players are human, some of them are still fairly young and inexperienced. It’s totally feasible that Wexford could come to Nowlan Park fired up, mad keen to get last week out of their system, looking to put a marker down. What happens then?

Let’s say it’s Wexford who get a couple of early goals, and it’s Kilkenny who find themselves seven or eight points down. A few of the Kilkenny players might be telling each other that Wexford have to fade at some point here. But what if they don’t? At what stage does the thought of a month off and a reset game against one of the Joe McDonagh teams slip into the minds of the Kilkenny players? If that happens there’s not a lot Cody can do about it from the sideline.

This is all a consequence of the shadow Galway are casting across Leinster. The winners on Saturday face the possibility of being beaten twice by the same team before the middle of July. The big worry is the psychological damage that could come from getting another bad beating in a Leinster final.

Any team can get hammered on a given day. Hurling is like that – scores just pile up out of nowhere and a game gets away from you. But when a team gives you two scutchings in the space of six or seven weeks, that’s different.

Straight away you doubt your ability. Your confidence is punctured. All the plans you’ve made over the previous six months, the whole value system you’ve nurtured since you started training back in the middle of winter, all of that is immediately questioned. What have we been doing? Have we been wasting our time?

But playing a confident team like Galway twice and they’ve blitzed you both times, then you don’t have the trust in your instincts that you had before. All you want to do is take that extra second to think and not make a mistake. And if you’re thinking like that, chances are there isn’t very long left in your season. Championship hurling is ruthless in its treatment of players who need a bit more time.

I played on Kilkenny teams against counties that we had beaten well in previous games. We knew before a ball was pucked that those games were in their heads and that there was a mental fragility there for us to go after. That’s why we went for so many early goals. Get in there, open up those raw scars and see what their reaction is. A lot of the time they only had a flimsy plaster and that was that, game over before it ever really got going.

You can see that streak developing in Galway. I like that about them. They mean business, and it might take more than King Leonidas and his 300 Spartans to stop them from winning Leinster.

The question for Kilkenny and Wexford – do they put their season at risk by even trying?