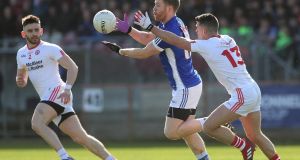 Tyrone top the Division One table, but their title challenge will rest on stiffer tests than this Ulster derby, with three of the country’s top teams – Donegal, Mayo and Kerry – still to be faced.

Cavan troubled the Red Hands for no more than 35 minutes at Healy Park, crumbling once the home side got going with the wind in their backs after the break.

Gearóid McKiernan’s goal gave Mattie McGleenan’s side a four-point lead at the break, but they were outscored by 12 points to one in a one-sided second half.

Now it’s a relegation battle for Cavan, and a trip to Castlebar could all but determine their fate next weekend.

Tyrone’s unbeaten record never looked in any danger, even when they trailed by that four points at Healy Park.

Cavan retreated into a packed defensive set-up early on, hoping to hold their opponents out and profit on the break, and it worked a treat early on as McKiernan and Dara McVeety nailed early scores.

But wing back Martin Reilly’s three wonder points kept Breffni in touch, and after being level six times, they hit the lead with McKiernan’s 34th minute goal and led 1-8 to 0-7 at the break.

It was one-way traffic for wind-assisted Tyrone after the break, with subs Mark Bradley and Ronan O’Neill firing over five points as they bombarded Cavan into submission.

Cavan manager and former Tyrone star Mattie McGleenan admitted they couldn’t live with Red Hand firepower in the second half.

“The quality they have is unbelievable, young Bradley came in and torched us,” he said as he contemplated a battle to avoid an immediate return to Division Two.

“We have a five/six day turnaround to Mayo and then Kerry after that. They are huge games but we are not going to learn without being punished for those mistakes. Cavan have a lot to learn and they need to learn fast and one of the things they have to improve on is their decision-making.”