Fixtures, team news and predictions from the Allianz Leagues and Fitzgibbon Cup final 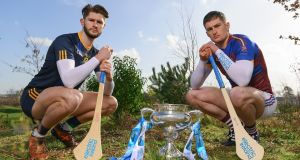 It’s their first final, they’re 13/2 outsiders, against one of the strongest college sides in Fitzgibbon Cup history: it will take something special for DCU to win this one They’ve hinted at the potential upset, not least when taking our reigning champions Mary in the quarter-final, and have plenty of intercounty wealth of their own, including Kilkenny’s Conor Delaney Wexford’s Paudie Foley.

For UL, seeking a sixth title, that wealth is more glittering, including Clare’s Tony Kelly, Ian Galvin, David Fitzgerald and Conor Cleary, and Tipperary’s Jason Forde and John McGrath. Sometimes it is more about the journey than the destination, and DCU have been brilliant to get this far. The title, however, looks destined for UL.

Kilkenny v Tipperary, Nowlan Park, 2.0; Here we go again. Just when fresh epitaphs were being written for Brian Cody they’re proving gravely premature, back-to-back wins over Cork and then Waterford leaving Kilkenny primed for a quarter-final spot - TJ Reid’s return to bag 1-11 against Waterford last Sunday a sign too they’re only getting going.

Both teams however clash with Saturday’s Fitzgibbon Cup final between UL and DCU, Tipperary losing UL forwards Jason Forde and John McGrath, who between them scored 2-10 between in last Saturday’s narrow over Clare (Kilkenny too lose John Donnelly and Conor Delaney involved with DCU). That may well prove more costly for Tipp as they seek a first win over Kilkenny in Nowlan since 2008.

Wexford v Clare, Innovate Wexford Park, 2.0; Expect the expected. Clare have been flying over the winter ground, three wins from three, the last place they’ll want to lose now is on Davy Fitzgerald’s adopted turf. Yet nothing would give Fitzgerald more pleasure to inflict it.

More Fitzgibbon conflicts here, Wexford without defender Paudie Foley, on top of a growing injury list including Jack Guiney. Young Rory O’Connor did get a run in defence in the narrow loss to Tipp last Saturday night, when missed chances cost them a possible draw. Wexford support has been telling, and if anything that pain of last Saturday could provide the winner spur for Wexford.

Cork v Waterford, Pairc Ui Chaoimh, 3.0: Derek McGrath may have mastered the art of not taking the league serious, but defeat to Kilkenny last week, extending the now two-year winless home run in Walsh Park, can’t be good for morale, even with so many first-choice players absent.

It’s hard to see them lift things here either against a Cork team who have yet to concede a goal while racking up high scores, even if falling short against Wexford an then Clare. Truth is Waterford have looked out of sorts on several fronts, more than half their 1-12 the last day coming from placed balls, and even ii thinking long-term, this form has to be a little worrying.

Offaly v Laois, O’Connor Park, 12.30; Offaly’s brilliant opening round win over Dublin, scoring 2-25, fast faded into time, Limerick and then Galway inflicting a similar scoreline on them. This is certainly one manager Kevin Martin won’t want to lose, especially home, through there’s some reason to fear they will. Laois did put up 0-27 against Antrim, and beat Offaly by six points last year. It comes down to who wants it more and that has to be Offaly.

Dublin v Galway, Parnell Park, 2.0; No pain no gain, as Pat Gilroy well knows, with the prospect of more of the latter as Dublin welcome league and All-Ireland champions to Parnell Park. What Gilroy will want to see is some gain on last week, when Dublin trailed Limerick 1-13 to 0-7 at half-time. Galway have been tipping and experimenting away but closing in on promotion, won’t want to slip up here, and with a few more first-team players back on board, including Gearoid McInerney, they will hurt Dublin.

Antrim v Limerick, Cushendall, 2.0: Like Galway, Limerick are fast closing in on what will likely be the promotion decider in Pearse Stadium on Sunday week. They’ve been extremely mean in defence and there’s nothing to suggest Antrim will fare any better, while in the attack Aaron Gillane and Seamus Flanagan are sharp. The trip to Cushendall is never easy but Limerick will arrive well equipped for the win.

Keenan, Conan and Penny agree new Leinster deals 20:28
UCI bans cyclists from giving water bottles to fans 20:17
Liverpool apologise to Real Madrid after bus window is smashed at Anfield 20:12
Solskjær claims confused players seeing too much red at Old Trafford 18:45
French Olympic president says athletes should ‘pass’ ahead of others for vaccinations 18:06
Crossword Get access to over 6,000 interactive crosswords