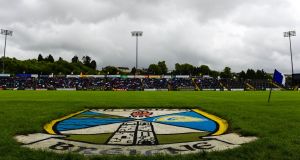 A turbo-charged first half display worked the oracle for Cavan as they leapt to the top of Division Two of the National Football League.

Cavan left erstwhile table-toppers Meath licking their wounds after a typically tigerish display at Kingspan Breffni. In a typically fiesty, derby duel, the Ulstermen showed their neighbours a clean pair of heels before the break as they raced into a 1-8 to 0-4 lead.

The home side had a Midas-like touch early on in front of a bumper 6,572 attendance, but faded in the final quarter.

Predictably, Meath recovered from their sluggish start to keep Cavan honest with a gutsy if ultimately fruitless second half display.

Played on slippery surface, greased even further by slanting rain, two points apiece by the elusive and lively pair of Caoimhín O’Reilly and Niall Clerkin helped propel the hosts into a 0-6 to 0-1 lead after just 14 minutes.

Eamon Wallace got Meath on the board in the fourth minute but they were to play a poor second fiddle for the remainder of the first half.

Meath were all perspiration in the final third to Cavan’s inspiration and their raids on Cavan’s goal were powder puff and lacking in conviction.

After Bryan Menton’s swirling effort made it four wides for the visitors, teammate Graham Reilly had better luck to cut Cavan’s lead to a slightly more manageable 0-7 to 0-2.

Moments later, Cavan consolidated their lead when Conor Moynagh reacted first to rifle the ball to the net after Adrian Cole’s shot rebounded off the upright.

To rub further salt into the wound, Cavan brought on their heavy artillery from the bench at half-time in the shape of Gearoid McKiernan and Cian Mackey.

Just nine minutes after the restart, the blues headed for home with Ciaran Brady’s fine solo goal the vehicle. Brady’s strike gave Cavan a 2-10 to 0-6 lead with the game as good as over.

Meath hung in there though and a Donal Lenihan penalty resurrected hopes of a comeback.

A brilliant diving save by Meath goalkeeper Andy Colgan denied McKiernan a goal in the 54th minute as Cavan sought to see the game out.

And while they lost control of the final quarter, Cavan’s discipline in the tackle was exceptional denying Meath frees.

Their penalty aside, Meath lacked a cutting edge close and the goal(s) that might have got them out of jail never materialised.