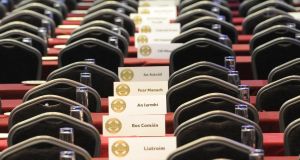 GAA congress has voted to ban sponsorship by betting companies ‘of any competition, team, playing gear or facility’. The vote was overwhelmingly passed by 93 per cent of the delegates.

Management committee member and Connacht chair Mick Rock proposed the motion and spoke of people being ‘besieged with opportunities to gamble’. Former Galway hurler Alan Kerins, representing the Gaelic Players Association, commended the GAA for ‘taking this leadership step’. He also said that of 77 players presenting to the GPA for counselling, more than half were for ‘gambling-specific issues’.

“A survey conducted in 2015 showed a higher prevalence of addiction amongst Gaelic athletes than among other, professional athletes,” he added.

Down delegate Jack Devaney supported the motion and called for it to be extended. “I hope in time to come that a similar motion can be extended to alcohol companies.”

Galway chair Noel Treacy, supporting, recommended that the association keep an eye on pending legislation on the matter.