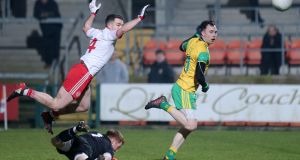 Donegal ended Tyrone’s six-year hold of the Dr McKenna Cup as Declan Bonner’s side secured victory at the Athletic Grounds in Armagh.

The two meet again in the Allianz League in a fortnight’s time, when the mercury can expect to be considerably higher, but this was certainly a timely win for a Tír Chonaill side that had come up just short in their first three league outings.

When Martin McElhinney cancelled out Harry Loughran’s goal in the opening 10 minutes, it was the cue for a rip-roaring encounter.

After Daire Ó Baoill, who was making his first senior start, popped over two early points for Donegal, Tyrone drew blood when Loughran got on the end of Conal McCann’s delivery to prod the ball beyond Donegal goalkeeper Shaun Patton.

Donegal’s response was swift, though. Odhrán Mac Niallais gave the invitation and McElhinney – in for his first appearance of 2018 -–clipped a delightful effort over Tyrone netminder Mickey O’Neill.

Donegal were buzzing now and, with Paul Brennan, Mac Niallais and Martin O’Reilly on the mark, they led by five.

Frank McGlynn, another in for a first outing of the Bonner era, converted and Donegal were 1-9 to 1-6 in front at the interval.

Former Sligo Rovers goalkeeper Patton – who has thrown his lot in with Donegal this year in an attempt to become the county number one – saved smartly from Ronan O’Neill in a moment midway through the half that kept Donegal in command.

When O’Neill tucked over in the 46th minute, there was a feeling that the tide was perhaps turning.

But teenager Niall O’Donnell landed a brace and Michael Murphy, not long into the action, hit another to restore Donegal to the driving seat.

Murphy was sent on early in the second half and Mickey Harte called the heavy artillery too from Tyrone’s bench with Cathal McShane, Mattie Donnelly and Peter Harte thrown into the fray.

Tyrone were within a point again but Brennan landed a wonderful effort and Murphy steadied the ship with a free.

Donnelly was given his marching orders for a pair of late yellow cards and when Murphy stroked over in added time Donegal – who also gave a late cameo to the returned Neil McGee – had sealed a first McKenna Cup success since 2010.