O Fearghail bows out after time of great change in GAA

Outgoing president was most happy when engaged in ambassadorial duties 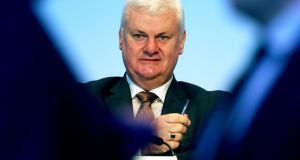 Outgoing GAA president Aogán Ó Fearghail presented a good image both within the association and at home and abroad. Photograph: Tommy Dickson/Inpho

It has been the lot of GAA presidents in the past 10 years to be judged by exaggerated standards. The great repeals of the last decade, which saw the bans on membership for British security forces and on other sports being played in Croke Park swept away, removed the big reform items of the progressive agenda.

It created an expectation of presidential legacy, which has tended to overlook the limitations of the office. The first post-reform president was Nickey Brennan, who by the end of his term of office was suggesting that the role needed to be redefined as a figurehead.

Presidents are seconded from their employers, who continue to pay the salary, which is then reimbursed by Croke Park. Sometimes the distinction between chair and chief executive gets blurred.

When outgoing GAA president Aogán Ó Fearghail was elected back in 2014, he echoed Brennan’s conception of the role. “I’m definitely an ambassadorial president. I think there’s only one chief executive in an organisation and I would be very adamant about that.”

In the event, as he winds up his tenure at this weekend’s congress in Croke Park Ó Fearghail has presided over a time of extraordinary change in the organisation.

As he slips into the ranks of iar uachtaráin, Ó Fearghail leaves an organisation embarking on the most radical championship reforms in the history of the GAA, admittedly for a three-year trial period but few believe the old structures will be reintroduced in 2021 regardless of how the experiment proceeds.

At his very first media conference as president in 2015, he flew the flag for football championship reform, advocating strongly the retention of the provincial championships, questioning the qualifiers and promising widespread consultation, which duly happened but produced little.

Nearly everyone wanted change but no consensus emerged. The only idea that came out of the 18 proposals submitted was for a second-tier championship and that was emphatically rejected by the counties, who would have been consigned to it.

The reforms that are about to be trialled arose however from a separate process, synthesised from various reports by director general Páraic Duffy – who is also outgoing at this congress – but Ó Fearghail backed them without equivocation and did the same with the hurling proposals that followed.

In his inaugural address he spoke about the four F’s: fixtures, finance, facilities and family and the one area in which he actually had direct influence was fixtures, which benefited from an increased focus in recent years.

“There are facts that are incontrovertible,” he said after last autumn’s special congress to adopt the new hurling championship format. “There are now more weekends free for club, that’s a simple fact. If you’re going to start (intercounty championship) in May and finish in mid-August there are going to be an awful lot more weekends.”

In terms of style, he was well regarded for the way he ran meetings – the president chairs central council and the management committee – allowing “everyone their say without letting it get out of hand” in the words of one verdict.

Ó Fearghail took office with a reputation as a public speaker but like many with a flair for impromptu oratory he at times could overdo it and it wasn’t always suited to the demands of the occasion. Initially he didn’t provide a script at all for his annual address at congress, making the denser policy sections hard to follow.

In his ambassadorial role he visited nearly 500 clubs and having attended one of these occasions, I was struck by how well his speaking style worked: fluent, engaging and humorous he was able to articulate from experience in his own club Drumgoon the challenges involved.

He presented a good image both within the association and at home and abroad, earning plaudits from one ambassador for his ability to impress overseas audiences.

Like a number of other presidents he could be thin-skinned. Successful candidates coming through the provincial system, as he did in Ulster, are often unprepared for the level of scrutiny that comes with the job. Unlike a county committee with a local media, the provincial councils tend not to attract huge publicity.

From early in his presidency Ó Fearghail was a bit too ready to trade barbs with pundits – criticising the Sunday Game for its negativity and getting back plenty of high-profile criticism, some of it belittling and unfair, from RTÉ panellist Joe Brolly.

For someone with a PhD and a deep intellectual interest in the GAA and its history, the president could be surprisingly uncertain at times.

In Dubai in 2016 he gave an interview in which he was asked about the use of Irish tricolour at Gaelic games overseas. His immediate answer was that it and the anthem could be reconsidered at home as well but in the context of “an agreed Ireland”.

The sentiment wasn’t radical but the reaction at home prompted Ó Fearghail to retrench the position on his return, citing tendentious headlines in the media. Wags used the episode to include “flags” in an expanded five “Fs”.

There were however plenty of opportunities for him to pursue his interest in history, like the 1916 centenary even in Croke Park, the wreath laying on the 95th anniversary of Bloody Sunday as well as the Museum Summer School, which ran in years two and three of the presidency.

If the whole “legacy” issue is misleading, it would also be fair to say that plenty happened on his watch.