Fixtures, team news and predictions from the Allianz Leagues and club semi-final 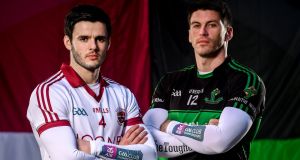 For all their reputation as a tight defensive unit – no goals conceded in a demanding Ulster championship campaign – Slaughtneil’s style has evolved, as the almost shoot-out against Kilcar in the province indicated. Chasing a third All-Ireland final in four years but yet to win one, Mickey Moran’s team are up against the championship’s aristocracy, roll of honour leaders Nemo. The Cork club has also improved in the past year and with a decent county final against St Finbarr’s and an impressive Munster dethroning of All-Ireland champions Dr Crokes. They’re slick and full of movement but forward driven with potential physical vulnerability at the back. In what promises to be a fascinating contest, Slaughtneil may just be better able to turn the screw at the right time.

Allianz Football League Division One [Matches at 7.0 unless stated]

The mood in Mayo isn’t great with injury and suspension sabotaging Stephen Rochford’s attempts to progress the team’s challenge. Conversely, Dublin have been able to bring back the regulars and road test the up-and-coming. There have been tendencies to drift in matches so far but the champions have finished strongly. There was some good news for the home side with Cian Hanley, back from the AFL, linking up with the panel but otherwise, Groundhog Day.

Monaghan handed Kerry a first defeat last week with a win that was based on an impressive first half. The difficulties after the break in retaining possession would be ruthlessly exploited by Tyrone if repeated. Mickey Harte’s team have yet to fire and followed up the slight fortuitous win in Kildare by losing the McKenna Cup final to Donegal, albeit with a shadow selection.

Tipperary v Meath, Semple Stadium - Both teams have had disappointingly fitful campaigns to date. Tipp in particular promised more after winning in Cork on the opening day. Meath were unexpectedly clear losers in Cavan last week but the expanses of Thurles will suit them.

Fermanagh v Derry, Brewster Park - A revisiting of the fixture played a division higher last year after which both were relegated. So far Fermanagh have shown far stronger signs of bouncing back and that should continue here.

Waterford v Carlow, Carriganore, nb 4.0 - Although Waterford have been quite competitive, Turlough O’Brien has Carlow threatening a best league in years.

Donegal v Kildare, Ballyshannon - A conventional relegation shoot-out, as the losers are going to be top of the queue for taking the downwards escalator. Both are stranded on zero points at the bottom of the table but competitive enough to have single-digit (minus) point differences after three defeats. On a form line through Dublin in Croke Park, Donegal asked the harder questions and also have home advantage.

Kerry v Galway, Austin Stack Park, nb 2.30 - Galway’s hot opening streak, which has placed them joint-top in the division is about to be tested. Their wins have been against three of the bottom four teams and they haven’t beaten Kerry in 15 years. Eamonn Fitzmaurice’s team had their first defeat in Monaghan but with a line-up weakened by Sigerson commitments a temporary disruption to an encouraging influx of young players.

Cork v Cavan, Páirc Ui Chaoimh nb 1.0 - Slightly unexpected top of the table clash between an unbeaten Cavan and a rallying Cork, whose performance levels though have been disappointing. A chance for Cavan given injury and Nemo’s All-Ireland semi-final.

Down v Clare, Páirc Esler, Newry - Down surprised Roscommon two weeks ago to climb the table. This should be intriguing in the light of Clare’s two decent draws, with Cavan and Tipp, even though the visitors have also lost bigly against Meath. Down’s trajectory looks steadier and they have home advantage.

Louth v Roscommon, Gaelic Grounds Drogheda - It’s been a frustrating league for Kevin McStay with half the points available dropped so far. The loss of good defenders Seán Mullooly and Niall McInerney is a blow even though the latter could well be back in May after exams but there’s likely to be a backlash against last week’s awful display and Louth have been really struggling.

Westmeath v Sligo, TEG Cusack Park Mullingar - Westmeath are in the conversation for promotion but can be wasteful of chances (18 wides against Wexford) whereas Sligo are at the crossroads, having lost to the top two teams and beaten one of the bottom.

Longford v Wexford, Pearse Park Longford, nb 2.30 - Agonising setback for Longford, as a memorable win in Armagh beckoned before a late 1-2 handed them a one-point defeat. Wexford aren’t making much impact on the season and this should be a home win.

Offaly v Armagh, O’Connor Park Tullamore, 2.30 - Bottom plays top and Kieran McGeeney’s team will be buoyed by the late steal against Longford but maybe concerned at the poor performance and inaccuracy. Offaly need to start moving but Armagh unlikely to oblige.

Leitrim v Limerick, Páirc Seán MacDiarmada Carrick-on-Shannon - Opportunity for the home side to climb off the bottom and they should take it.

London v Antrim, Ruislip, nb 2.30 - Antrim may come to regret the point dropped to Wicklow and need to win here against the surprisingly mid-table London.