Purcell hoping Laois can reclaim their place among the big guns 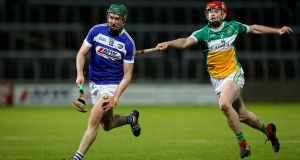 Laois’s Paddy Purcell in action against Offaly’s Andy Flynn. “You have to test yourself against the best, that’s the only way to improve,” says the Laois captain. Photograph: Ryan Byrne/Inpho

They’re just a win away from joining the Leinster championship yet given Carlow’s experiences there this summer, one wonders if Joe McDonagh Cup finalists Laois should be careful what they wish for.

Eddie Brennan’s improving outfit are favourites to overcome Westmeath in Sunday’s tier two final at Croke Park and to earn a golden ticket to the 2020 Leinster championship.

Carlow won the inaugural McDonagh Cup title last season though four matches in the recent Leinster round robin campaign resulted in four defeats and relegation back to tier two.

Carlow manager Colm Bonnar argued that the GAA should consider making Leinster a six-team championship next year as with the “stroke of a pen” they could immediately give developing a counties a fighting chance of staying up.

It’s something that Paddy Purcell, who will captain Laois this Sunday, agrees with and would love to see implemented.

“I read that from Colm Bonnar and I agreed with him,” said Purcell.

“For us to improve if we do go up into Leinster, we obviously wouldn’t like to go back down the following year. You have to test yourself against the best, that’s the only way to improve. I would be very in favour of a six-team Leinster but I can’t see that changing this year anyway.”

Purcell said that the long-term ambition in Laois is to not just qualify for the Leinster championship but to remain there and be a competitive force.

The experienced midfielder said Dublin offer a template in this regard for improvement and for rising up through the ranks.

Laois will play Dublin in the preliminary All-Ireland quarter-finals if they win the McDonagh Cup final while the losers will face Cork.

“Looking at Dublin, they’re after coming from a place where we were and now they’re competing at the top table,” said the Rathdowney-Errill man.

“They’re kind of the standard bearers for us, they’ve shown what can be done if the hard work is put in. They have taken it to a new level, physicality wise even, so they are an exceptional team and an example for us.”

Laois got up close with excellence in the quarter-finals of the league but were blown away by All-Ireland holders Limerick, losing 2-22 to 0-11.

Yet Purcell believes that the gap between Laois and the top counties isn’t as large as everyone thinks.

“In a county like Laois there is a turnover of players every year as well, so you might be missing two or three next year, and maybe two or three new lads come in and mightn’t be up to the physical side of it.

“It can take a couple of years then to build up to that physical level. That’s where the top tier teams are at an advantage, they always have the lads they want available.

“That’s another reason why it’s a big incentive for us to get into the Leinster championship and hopefully we’ll keep everyone that we want available to us.”

Laois and Westmeath drew 1-22 apiece in their final McDonagh Cup group game, a “fairly tame affair”, according to Purcell.

He expects a blood and thunder final with the losers also guaranteed that preliminary quarter-final clash with Cork.

“Obviously we want to win the Joe McDonagh and if you win you play Dublin, that’s the route we want to take,” said Purcell.

“We’d definitely relish a big match like that against a top team. We saw what Dublin did against Galway so we know that they’re flying it at the minute. We were very close to them in the league but we know the league is completely different.”

Westmeath are back in the final after losing to Carlow last year. They beat Laois 2-21 to 1-21 in that 2018 campaign and Purcell hasn’t forgotten the defeat.

They beat us convincingly, bullied us nearly last year,” he said. “They’re a good team. Killian Doyle is flying it and Tommy Doyle is probably the best full-back in the country.”