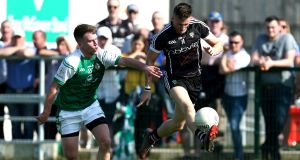 Sligo righted the wrongs of their shock loss to London in 2013 as they cruised to a one-sided win at Ruislip.

The Yeats County became the first side to lose a Connacht championship match in the English capital when they were beaten by a point five years ago, and six of the team that started that day were back looking for revenge.

None more so than Adrian Marren, who top scored with 1-6 as Sligo punished a malfunctioning London kick-out. Eleven different players got on the scoresheet for the visitors, who made light of the 27-degree heat as attention quickly turned to a Connacht semi-final against Mayo or Galway.

“The most positive thing would be the way we played as a team,” said Sligo manager Cathal Corey.

“It was a real team performance, from our goalkeeper who was brilliant to the five subs used, I thought every man came in and done a job.

“We are all the one team, from the lads on the bench to the backroom team, and everyone has just one goal - for Sligo football to improve.”

London themselves have made great strides under manager Ciaran Deely and named seven English-born players in their starting line-up, including five in the forward line.

However, it was up front where they badly struggled. They blew seven scoring chances in the opening 10 minutes, while at the other end Sligo came away with five points from as many attempts.

That sucked the life out of the hosts and as their kick-outs started to go awry, they were hit for 1-3 in a three-minute spell as Sligo effectively put the game to bed.

Niall Murphy was outstanding in midfield, kicking two fine points and setting up another with a pinpoint crossfield ball, while Sligo’s surges forward from deep sucked in defenders and allowed extra space for Marren.

The goal came from the penalty spot on 24 minutes, Marren sending Gavin McEvoy the wrong way after the London goalkeeper had taken out Gerard O’Kelly-Lynch, and by the half-hour mark Sligo were ahead by 10.

London were already in Hail-Mary territory but they then produced the move of the game to score a much-needed goal.

Mark Gottsche, who was man of the match against Sligo in 2013, took a superb catch at centerfield and galloped towards goal. He found support in Marcus Mangan, and a slick one-two between Fearghal McMahon and Ryan Elliott saw the former tap into an unguarded net.

A late point from captain Liam Gavaghan cut Sligo’s lead to seven at half-time - 1-10 to 1-3 - and there was a brief sense of a London comeback when they scored three points in two minutes after the restart.

However, the wind was knocked out of their sails when Gottsche was black-carded for an off-the-ball hit, and full-back Ciaran Dunne followed shortly afterwards for a cynical tackle after a hospital pass from Sligo native David Carrabine.

Carrabine’s brother Sean came off the bench for the visitors and made an impressive impact, kicking two points, and the Sligo substitutes exposed a tiring London defence in the final quarter as the kick-out problems continued.

“We had to manage the heat, the weather was 26 or 27 degrees so Stephan Coen, Sean Carrabine, they are big players for us and we just felt taking them off the bench would help us when we needed to see the game out. Cian Breheny came in there too and just the electric pace that he added to it.

“We knew if we could get to the last 20 minutes, and them boys coming off the bench, that heat would cause London a wee bit of bother.”

1 Should fans be allowed drink in the stand at sporting events?
2 Gerry Thornley: England primed to show their best against Ireland
3 Frank Lampard says Harry Maguire should have been sent off
4 Stopping Jonny May’s pace must be high in Ireland’s priorities
5 Tipping Point: Eddie Jones’s rhetoric is out of place in a febrile political climate
Real news has value SUBSCRIBE

Frank Lampard says Harry Maguire should have been sent off 06:36
Willie Mullins prefers to ‘keep it simple’ and run Benie in Mares Hurdle 06:00
Stopping Jonny May’s pace must be high in Ireland’s priorities 06:00
Monaghan and Mayo face off with relegation a real prospect 06:00
Should fans be allowed drink in the stand at sporting events? 06:00
Crossword Get access to over 6,000 interactive crosswords