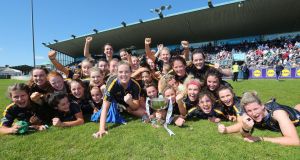 The victory marks an impressive rise for Shane Ronayne’s 2017 TG4 All-Ireland intermediate and Division 3 champions, as they now make the jump to top-flight league football.

Three goals from Aishling Sheridan (two) and Róisín O’Keeffe in Parnell Park weren’t enough for James Daly’s Cavan, as they fell at the decider stage for the second consecutive year, but proceedings didn’t finish without some drama at the end.

Referee Stephen McNulty awarded a penalty with roughly 20 seconds on the clock, for a foul on Bronagh Sheridan, but after discussing with his umpires, the decision was overturned and a throw ball ensued.

Tipperary would hold on for a one-point win, as captain Samantha Lambert paid a fitting tribute to the late Rachel Kenneally in her acceptance speech.

Tipperary started the brighter of the two sides, racing into a three-point lead before O’Keeffe stepped up with an inspirational effort in the ninth minute to open Cavan’s account.

After Tipperary’s early period of dominance with Cahir trio Moloney, McCarthy and Róisín Howard combining to threaten, Bronagh Sheridan and the ever-impressive Donna English helped the Breffni side find their groove.

With time, the game developed into a fascinating battle, the intensity matching the rising heat as momentum switched over and back between the sides. Moloney produced some stunning long-range efforts but the main event of the first half came in the 24th minute.

After some confusion surrounding a line ball, Aisling Sheridan found herself with oceans of space and after a driving run towards goal, she rattled the net to make it 1-4 to 0-6.

Moloney and McCarthy struck back almost immediately at the other end though, before Bronagh Sheridan had a golden opportunity to double Cavan’s goal count.

Lauren Fitzpatrick produced an impressive double-save to keep the ball out though before O’Keeffe and captain Sinéad Greene consecutively split the posts to make it 1-7 to 0-10 at the break.

Cavan had the dream restart, with the ball in the back of the net straight from the throw-in. After some brilliant work from English, Aisling Maguire and Ciara Finnegan, O’Keeffe palmed home.

Mairéad Morrissey responded at the other end while McCarthy’s pristine display of free-taking continued to keep the scoreboard ticking over.

It looked like Tipperary could pull clear but Evelyn Baugh pulled out a top-drawer save to deny Orla O’Dwyer and keep the score at 0-15 to 2-7.

It turned into a tit-for-tat between McCarthy and the Sheridans for a short period, with Cavan reduced to 13 as Gráinne McGlade was sinbinned before Aishling Sheridan again rattled the net on 51 minutes.

A nailbiting ending saw Tipperary do just enough through McCarthy and Niamh Lonergan to hold on, but not without that extra late, late drama.