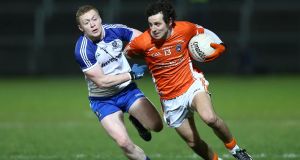 It’s reached the stage now where if New York do win this one it may not even count as a shock. Because in their 20th season of playing in the Connacht football championship, still seeking that elusive first win, rarely has victory looked more attainable.

At least one glance over the teams suggests as much. New York manager Justin O’Halloran has named a starting 15 instantly more familiar than Leitrim, starting with former Sligo goalkeeper Vinny Cadden, who produced a man-of-the-match display in New York’s one-point defeat to Roscommon in 2016.

No wonder New York they find themselves at the shortest price they have ever been to win a match in the championship, at 6/4.

Leitrim have star forward Emlyn Mulligan back on board after missing last year with a cruciate injury, but they are a young side, selector Séamus Quinn, a survivor of that 2003 escape, admitting they are wary of New York. They should be. New York immortality beckons.

This produced a definite shock in 2013 when London beat Sligo by a point in their first win in the Connacht championship since 1977, but it wouldn’t be such a shock this time.

Sligo only won two games in Division Three, one of those being the battle for survival against Derry in the last round in Markievicz Park, 3-11 to 2-12.

London were at home for all their league games and showed some encouraging signs under manager Ciarán Deely, losing to Laois by two points, and also within a couple of points of Antrim and Carlow, the three best teams in Division Four by a distance.

It’s Cathal Corey’s first match in charge as Sligo manager, and the expectation is great, even with the winners going on to face Mayo or Galway. It will be tight but Sligo can prevail.

Here they come again. With essentially the same teams that played out the 2017 All-Ireland final in Croke Park last September, in front of a record 46,286 attendance, Dublin go in search of a first league title, with Mayo aiming for their first since 2007.

Dublin have been here before, beaten finalists in 2014 when they lost out to Cork, and Mayo were also runners-up to Cork in 2016.

Between them they have 22 players from their All-Ireland showdown, Dublin manager Mick Bohan naming 12 of the team that started at Croke Park last September, while Mayo manager Peter Leahy has opted for 10.

It means Dublin have all bar defenders Sinead Finnegan and Rachel Ruddy, along with attacker Carla Rowe: no shy replacements though, as into the Dublin team come 2010 All-Ireland winner Siobhán McGrath, Deirdre Murphy and Oonagh Whyte, who scored two goals against Mayo when the sides met in the group stages.

Leahy will not be calling on Cora Staunton until after the league, which hints further at Dublin’s capacity to win out this one too.