Galway a glorious mystery as they prepare to defend title 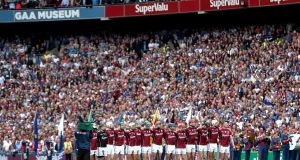 Galway have either won the All-Ireland or been put out by the champions in five of the past six seasons. Photograph: James Crombie/Inpho

Twelve months ago, only the blind or the wilful dismissed Galway’s prospects in the upcoming championship.

Even though three decades of finding new and interesting ways not to lift Liam MacCarthy meant all the usual caveats applied, their claims ahead of the 2017 Championship were nonetheless obvious to all.

As Seán Moran put it in his county-by-county preview: “Great things – or the falsest dawn in a while – beckon.”

If you wanted evidence to back up your assertions, you just pointed to the league final with the sort of flourish with which they themselves had dealt with Tipperary. A 16-point victory looked to be all the proof required. They were the real thing. Or a close enough approximation of it to be a prime contender until the real thing came along.

As they ought to be this year, indeed.

For all that the All-Ireland race looks relatively open, the road to it is still likely to go through Galway. They have either won the All-Ireland or been put out by the champions in five of the past six seasons. Micheál Donoghue hasn’t lost any personnel from last year and now he has at his disposal a squad of All-Ireland winners. There’s every chance they pose a greater threat to the rest than they did this time last year.

“They’re still my favourites to win the All-Ireland,” says former forward Damien Hayes. “They have the quality, they have the players. The truth of it is, I feel they should be going for three in a row and could be going for four. They should have beaten Kilkenny in 2015 and only lost by a point to Tipp in ’16.

“To me, those were two games they should have won and you’d be talking about them now as three-in-a-row champions. The point I’m making is that they haven’t been far away in any of the seasons in recent years so there’s no reason to think they won’t be there or thereabouts this year either.”

So goes the theory, anyway. Can we be so sure, though? What can we really expect from Galway now, a year and an All-Ireland later? Or, perhaps more pertinently, a year, an All-Ireland and its aftermath later?

Anyone who met a Galway hurler at the back end of 2017 could have been in no doubt that their achievements were being given their due celebration. The Fenway Classic trip in November spilled over for a handful of them into a Chicago trip a few days and nights later; the team holiday traversed the New Year, the squad landing back from Cancun just three weeks short of their league opener against Antrim.

The cobwebs were thick and clingy that day in January – Galway found themselves three points down with a quarter of an hour to go against the northerners before shaking themselves to turn it around.

Entirely understandable, for sure. Given how their Division 1B fixtures were laid out before them, with the crunch tie against Limerick ideally positioned as the final game a full six weeks down the line, there was no sense in being anywhere close to full throttle before then.

Yet here we are, with the curtain about to go up on a championship whose rhythms and demands are a mystery to everyone, and Galway are… where, exactly?

Their victories in 2018 have come against Antrim, Laois, Offaly and Dublin. Inasmuch as you can be involved in must-win games before May, they’ve played two and lost two. Limerick finally refused to take no for an answer in the de-facto Division 1B decider on March 11th and Wexford stared them down in the league quarter-final a week later.

No spring campaign in recent years has featured more experimentation and less desire on anyone’s part – stated or implied – to actually go and win the competition. For that matter, even in normal years, there has been no particular pattern over the past decade in the worth or otherwise of being stress-tested in the league when you’re defending an All-Ireland title.

Clare topped Division 1A in 2014 but exited the summer in the first round of the qualifiers. Tipp were imperious until last year’s league final defeat and never quite shook the stink of it off for the rest of the year.

Even if there was a discernible pattern, it would be a stretch to apply it to Galway in 2018. Each of those other teams defended their All-Irelands from Division 1A. They had to knuckle down earlier, if only for fear of giving succour to future opponents.

Galway were able to sleepwalk their way through to the business end of the league and even then, it wasn’t immediately clear whether they truly thought it worth their while.

The siting of David Burke at full-forward for the Wexford match, for instance, seemed like little more than an attempt to bamboozle Davy Fitz ahead of their championship meeting on June 2nd.

Last year, Burke became only the fourth player in history to pick up three consecutive midfield All Stars – after Liam O’Brien in the 1970s, Jerry O’Connor in the 2000s and the immortal John Fenton who won five in a row in the 1980s. Unsurprisingly, Burke had no major impact on proceedings at 14 and will surely revert to midfield for the summer.

Donoghue has had to make-do and mend as the spring has gone by. David Burke’s first game of the year was in the Limerick game. Joe Canning did his first hurling since the All-Ireland final that day too. Daithí Burke missed the whole campaign, winning a club football All-Ireland with Corofin. Colm Callanan has been out injured all year, with James Skehill set to take hold of the number one jersey for the foreseeable future.

None of which is necessarily cause for panic. But neither is it anything like the solid foundation that caused everyone to put them up as unimpeachable contenders this time last year. It is entirely likely, of course, that they don’t need all that good stuff now that they have their All-Ireland stashed away. Hayes, for one, certainly isn’t worried.

“They came back late and eased their way through the league,” he says. “And when they were finished with that, they got stuck into their own training together all the way up to now. This thing of April being a month for clubs has been an absolute joke. I play with Portumna and we have two lads in with the county. We’ve seen them for two games – and that’s the day of the game and the night before. Otherwise, they’ve been in with Galway the whole time.

“So I wouldn’t worry about the league. They’ve had loads of time together since then to get everything in order. They were training away every Tuesday and Thursday night with the county and the only way we could have had them was to maybe switch our training to Wednesdays or whatever.

“But there was no point doing that because you’d only have your county lads coming in wrecked after the night before and minding themselves for the next night. So they were doing plenty all the way through. I have no fear for them being ready for the championship. They came back in late but they’re fully ready to go now.”

Whether or not Hayes’s bullishness is justified, only time will tell. Galway are 12-point favourites for their opener against Offaly next Saturday, after which they have a 15-day break before Kilkenny come to Pearse Stadium. It’s no stretch to say whatever switch they have to flip better be in decent working order by then.

Six days later, they go to Wexford Park, a venue where the home side, even in the bad years, have had a reasonable record. Since 2011, Wexford have played 12 championship matches at home, winning eight, drawing one and losing three.

They’ve beaten Kilkenny within the past year there and took down Clare when they were defending their All-Ireland. When Dublin were at the height of the Anthony Daly reign, they needed to bring Liam Dunne’s nascent side back to Parnell Park to beat them. Wexford will relish the visit of Donoghue’s side.

That six-day stretch won’t make or break Galway’s year. Whatever shape they find themselves in, they will surely be capable of third place at worst in Leinster and if they have to they will pick off whichever Joe McDonagh team stands between them and the quarter-final. But it will define for them – and for everyone else – where they stand in the general scheme of things.

Not alone that, it will do so for the first time since they stood on the steps of the Hogan Stand last September.

So far, all we know for sure about Galway in 2018 is that they couldn’t win the two games they most needed to when it was put up to them. We assume they’re significantly better than that. But we are taking far more on trust than has been the norm with recent defending champions.

That alone makes them a fascinating watch over the coming weeks.