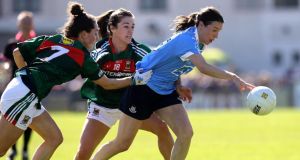 A first league title to sit on top of their All-Ireland, delivered with a performance of shuddering power and quality. At this rate they’ll also be looking to split Dublin women’s football into two.

Indeed Dublin picked up exactly where they left off in last September’s final, where an onslaught of goals eventually took out Mayo; this time Dublin began with the onslaught and Mayo never got a look in.

It has been a long time coming though, in the now 40 years of National Football League division one finals, this being Dublin’s maiden title, suitably inspired by one of their most senior players and captain Sinéad Aherne, now 15 years playing with the county, and finishing off the hot afternoon at Parnell Park with 1-9.

“We just got a really good performance today, which is very pleasing,” said Aherne, still looking fresh despite her toil.

“I thought our backs were absolutely incredible, we knew the threat that Mayo had, and they shut them down really well, for the rest of us to just drive up the field and get great scores.

“Conditions too, it being such a warm day, the bench was going to massive too, and the impact they made too drove us on. I think we played the conditions quite well because once we got on top, we managed to take the pace out of it a bit.”

And so, in a small gesture of sporting gender equality, they match the Dublin men’s team with the league to top their All-Ireland: “We still tried a huge amount of players,” added Aherne, “and we knew we have to improve again going into the championship. The semi-finals were really tight this year, one or two points, and that’s a really exciting place for women’s football to be.”

Footballer of the year Noelle Healy was showing her blistering pace in spurts too, scoring 1-1, while all six forwards scored in the first half, which at one stage had Dublin 11 points up, 2-9 to 0-4 – the winning margin in the end too, as they take over the title after Cork’s five-in-row.

For Dublin manager Mick Bohan, building on that All-Ireland title was important too, not least in creating that piece of history. “It’s hard to believe, isn’t it, that that’s Dublin’s first national league title,” said Bohan.

“The reality is, even though the scoreboard sometimes reflects an easy finish, they were in for two really good goal chances, took a couple of outstanding saves from Ciara Trant, Niamh Collins made a very important block. You get massive energy from a ball hitting the net, as opposed to it being blocked and turned away.

“But their ferocity in the tackle was outstanding, and the intensity in that first half was something that we hadn’t seen from them during the national league, but they’ve learned to step up when needs be.

“For Sinéad [Aherne] too, playing 15 years for Dublin and that’s her first national league title, for her, a spectacular day, to give such a performance, to captain the team, and obviously to create history.”

Mayo had made a fair game of it for large parts of it last September, aiming here for their first league title since 2007, only this one was soon out of reach.

Dublin hit the hard ground running: a series of swift, direct runs at goal resulting in the two opening points from Aherne, one free, then one from play, then on six minutes, up stepped Aherne for a penalty which was despatched low and hard to the net.

When midfielder Olwen Carey and Niamh McEvoy continued that barrage of scoring with a point each from play, Mayo were already chasing a 1-5 to zero deficit, with just under a quarter hour played.

Mayo then got on the scoreboard thanks to Fiona Doherty and Sarah Rowe. But then Laura McGinley, having just had a shot bravely saved by Rachel Kearns, hit the net again, putting Dublin 11 points up, 2-9 to 0-4.

Mayo added a point and then Rowe converted a penalty of their own, but in the first minute of the second half, they helped turned that uphill battle into a mountain: Grace Kelly sent a free directly into Dublin hands and down the field they raced, Healy finishing their third goal with pure class.