Here comes the summer and a wide open hurling championship 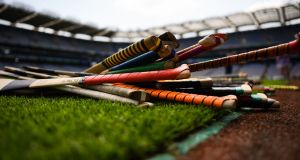 Here is what we know. We know almost nothing. No change there, says you.

Yeah, well you know almost nothing either, genius. Nobody does. Not even really the teams involved in the hurling championship, not their managers, not the referees, not the pundits. The summer of 2018 will be different to every one that has gone before it. We’re drawing the roadmap as we go.

“I think if we’re being honest, everyone is flying blind a little bit here,” Clare co-manager Gerry O’Connor told The Irish Times at the start of the year.

That was before a league campaign that they and everyone else treated as a petri dish. Wexford used 25 players in the spring, Galway used 33 – all the other contenders were at different points on the spectrum in between. Somebody is right, somebody isn’t. Do we know which is which? We do not.

You sign up and sign in without a second thought and you trust that everything is in order. But do you take the time to read through it all and tease out the pitfalls and possibilities? Does anyone?

Yet the demands about to be placed on players are genuinely extreme compared to what has gone before.

Wexford played four matches in last year’s championship over a span of 56 days. They will play their first four in 2018 in the space of just 20 days. Everyone else has their own version of that schedule change to deal with. For two teams in Munster – and possibly at least one in Leinster – the first four will be the last four. Championship over before the solstice.

So how do they go about it? Recovery will be the buzzword of the early summer. At least one county has been over to a Premier League club to pick their brains.

Others have plugged into the mainframe of the provincial rugby sides for ideas. One manager says privately that he can see his players taking every Monday off work during the group stages.

For once, there is no template. No successful neighbours to shamelessly copy. The time-worn GAA tradition of taking what last year’s winners did and making that your god doesn’t – can’t – apply here. You turn up your cards at the corners, make your best guess as to what the others are holding and push your chips into the middle.

“Everyone has to have a plan,” says Derek McGrath. “Even if it doesn’t work out, it doesn’t necessarily mean the plan was wrong.”

Feel free to mock our cluelessness. In our defence, we would know more if you could settle on a concrete idea of where any of the teams are at. But with the league having been such a hotchpotch, it’s hard to be dogmatic.

Galway haven’t won a game of consequence since last September and still they’re joint-favourites for the All-Ireland. Kilkenny were toast in early February and toasted by early April. Cork were a coming force in January but needed to squeak through a relegation play-off by the end of March. Tipp were Tipp and are Tipp – with all the good and bad that implies.

The Munster Championship has never looked more like a circular firing squad. Could you trust any of the five to win on a given day? Could you trust any of them to lose? There is the usual existential angst around the place about the prospect of dead rubbers in the final round of games but for that to happen you generally need teams go on winning streaks or losing streaks.

Tipperary are the short-priced favourites for Munster but you won’t get anyone predicting they’re going to plunder four from four. Clare are the 6/1 outsiders of the group but nobody seriously imagines they’re not going to win their share of games. Waterford have to travel for each of their matches – whether that’s a blessing or a curse will only become apparent as the weeks roll by.

In Leinster, it looks altogether more straightforward. Some combination of Galway, Kilkenny and Wexford are likely to fill the top three spots in the table, with whoever finishes third having to leapfrog a team from the Joe McDonagh Cup a month later to get into an All-Ireland quarter-final.

In an uncertain year, it would still qualify as a genuine shock if all three weren’t still standing when those quarter-finals come around on July 15th. We might not know much but we know that, at least.

Some other bits and bobs. The thick and fast nature of the early weeks won’t just affect the players and management. Eight games a weekend from mid-May to early June means 64 referees/linesmen/umpires needed in the highest-profile games. That’s reaching deeper into the pool more often than ever before. It would be unreasonable to expect all decisions to be flawless – there will need to be more understanding than usual. Some hope.

How will the alphabet soup of the disciplinary system work with six- and seven-day turnarounds the norm? Civilisations have risen and fallen in the time it usually takes to wend your way through CCCC, CHC, CAC and DRA. There could be some sleepless Friday nights.

How likely is it that a single named XV in a match programme will correspond to the one that takes the anthem? Well okay, we know that one.

Ultimately, the unpredictability of it all is the best part. And the freshness. Long overdue Leinster championship games coming to Pearse Park for the first time. The rocking summer town of Ennis, which has seen a grand total of five hurling championship matches this decade, suddenly hosting two in three weeks.

Dublin, from whom even Pat Gilroy must be curious as to what to expect, bringing Kilkenny to Parnell Park next Sunday – and then more importantly, bringing Offaly there next month in a possible relegation decider.

Come July, everything slows down a little. Everyone can breathe and gather themselves for the ultimate push. By then, we will know more than we do now and we can reassess accordingly. Just don’t let anyone tell you they know what to expect before then.

In this of all years, it feels okay just to not know. Free yourself. Revel in the championship as it presents itself. The chance won’t come again.

Johnny Sexton to return to training on Thursday 13:46
Imperious Roger Federer thumps Krajinovic to set up Millman show 13:43
Leona Maguire and Stephanie Meadow embark upon historic 2020 season 11:00
Naomi Osaka and Coco Gauff set up repeat showdown in Melbourne 08:41
Arsenal deny Chelsea at the death; Why there’s more to Saracens than money 07:51
Crossword Get access to over 6,000 interactive crosswords