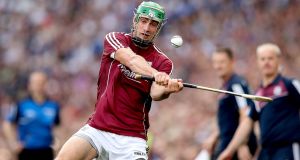 Galway’s David Burke is at the heart of everything they do. Photograph: Ryan Byrne/Inpho

Five years on from the Leinster title and touching distance of an All-Ireland final, the alarming slide in fortunes has continued to the stage where the biggest match will be against Offaly to determine whether they’re in next year’s McDonagh Cup. Injuries to key forwards Eamonn Dillon and Donal Burke are a big concern and the limited engagement of Cuala players disappointing but the fixtures are well spaced and Pat Gilroy’s project was never going to be short-term.

Eyebrows were raised when Conal Keaney returned to the fold at 35 and after two years’ retirement but the physicality is undiminished and his experience important in an evolving team.

Defending a first All-Ireland in 29 years brings its own challenges but trying to win a first in 29 years was the hard part. Even allowing that last year’s shock and awe campaign probably had to be modified and the team trained through the spring, league displays were nonetheless listless. After just two goals in the 2017 championship, scoring reduced even further with this season’s league total half of last year’s but the panel is in good shape.

At last Galway have meaningful championship matches at home with significantly, Kilkenny due in Salthill in three weeks. That enhances chances of both getting the campaign on track and a good finish.

Unexpectedly buoyant league saw a number of raw recruits settling in with more experienced campaigners for a satisfying final win over Tipp. It remains challenging though to replace the calibre of hurlers, who have retired. Michael Fennelly went after last year and another Hurler of the Year, Richie Hogan is recovering from a back injury. More positively Brian Cody has Paul Murphy and Colin Fennelly back from overseas and the familiar, formidable work ethic in a tightened defensive structure.

TJ Reid’s scoring burden is immense. Last summer he scored four of Kilkenny’s five goals and accounted for 57 per cent of the total scores. This league in his six starts he scored 1-78 from 6-138 or 52 per cent.

Great start to league in Croke Park walloping of Dublin but tailing off a bit although it has been suggested that Kevin Martin targeted certain matches - Dublin, Laois in order to stay up and the quarter-final when they squeezed Kilkenny. That won’t be as easy, as the pace quickens and they have to travel for what’s likely to be the crunch relegation match with Dublin but that the conversation is live is a tribute to how far they’ve come.

In the league quarter-final the defence was excellent and conceded the smallest score of all Kilkenny’s play-off opponents. Corner back Ben Conneely stood out not only on the day but throughout the campaign.

Critical second album for David Fitzgerald. Mixed signals so far: on the positive side the return to the top division went smoothly with comfortable survival and an exciting win over champions Galway. Against that there were indications that Kilkenny are beginning to get the hang of them after two wins, including a sizeable semi-final margin in Wexford. Fuss over Jack Guiney’s dropping wasn’t great mood music either but they’re likely to come to the table with more than they’ve shown.

Defensive solidity has remained surprisingly intact despite the step up from 1B last year. They ended with the lowest concession in 1A, just 0-3 more per match higher than in 2017.

It’s gone quiet in Clare after a good start to the league culminated in the surreal eight-hour quarter-final in Limerick. It looks likely that David McInerney will revert to full back to add some pace to the inside line and tighten the defence. Tony Kelly and Colm Galvin is the old firm centrefield but firepower is questionable, dependent on Peter Duggan and optimising Shane O’Donnell’s threat. At their best they’re competitive but can they maintain the tempo over five weeks?

Very reliant on their first 15 with the highest number (nine) of players starting every league match. Their challenge flagged in later weeks. Can they sustain it better in the championship?

The air went out of Cork after last year’s unexpected Munster title: losing the semi-final against Waterford, manager Kieran Kingston not too long afterwards and finishing bottom of the league. John Meyler’s succession from within lent continuity and promising young talent from last year will be more experienced although the burden of expectation will be heavier. Winning the relegation play-off was a positive and as last year showed they’re a momentum team, so a good start could ignite the championship.

Meyler recast the defence, using Eoin Cadogan at full back, and ever-present newcomer Tim O’Mahony at six. The latter’s serious elbow injury means this needs revision, in Munster at least.

In a county notoriously quick to lose the run of themselves, the team has already delivered something of substance this season. Years of languishing in 1B were ended with a 100 per cent campaign, beating All-Ireland champions Galway to promotion and taking Tipp to extra time in the semi-final. John Kiely has good panel depth and his under-21s are coming through. The question will be have they sufficient quality to make a serious impact? Instinct is that they have.

Under-age star Aaron Gillane has brought all his menace and scoring capacity intact to the main stage. A troublesome leg injury allowing, the potential for an outstanding rookie championship is there.

If last year’s league final was a major pothole for Tipperary this year’s looked more like the edge of a cliff. Another hapless defeat by Kilkenny was just what wasn’t needed. Dilemmas abound: James Barry needs to regain form at full back; Ronan Maher at centrefield unbalances the half backs and where to put Michael Breen? On the upside the already sublime capacities of the full forwards were embellished in the league by Jason Forde’s form. Making that count is the challenge.

Séamus Callanan returns just in time. His consistent Hurler of the Year credentials are desperately needed. Tends to regain form slowly after injury but now needs to hit the ground running.

In maybe his final year, Derek McGrath will try to juggle scarce resources to improve on last year’s All-Ireland final. The separate departures of leading forward Shane and capable man marker Kieran Bennett weaken the team and the promising Conor Prunty has a calf injury. Austin Gleeson will probably recover from ligament damage and may be given a freer role, at wing back. Dependence on veterans Kevin Moran and Michael Walsh persists and busy schedules will pressurise the panel’s questionable depth.

With no adequate venue, Waterford have to play their home matches elsewhere, including Tipp in the Gaelic Grounds where they have beaten them just once, in 1963. An unwelcome additional challenge.