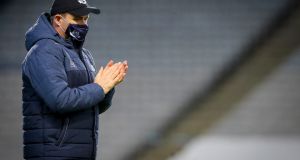 At the end of 2019, there would have been no shortage of takers for the idea of Dublin as six-in-a-row champions but thanks to stirrings in China 12 months ago, that headline outcome is nearly the only thing people got right about this year.

For most of the first six months there was general pessimism about whether we’d have a championship at all. It is greatly to the credit of the administrators, players and management teams that the whole idea of a championship was pulled together as successfully as it was.

There was the loss of Sligo footballers after a coronavirus outbreak after the resumption of the intercounty season but otherwise the championship progressed remarkably free of crisis.

The restoration of a knockout format in football meant that numbers were reducing at a brisk rate every week but after the reckless abandon of the county championships the intercounty season proceeded soberly and it would have to be said, sadly with no supporters to share the many achievements of the year and no trophies to be bussed back in triumph.

In a year of shocks and strangeness it stands hugely to Dublin’s credit that they took on all comers, up to and including a final that tested them far more than any of the previous engagements, and found a way to win.

One man can take particular satisfaction. Dessie Farrell was appointed manager just a few days beyond a year ago. He was taking over late in the year and with a team holiday to come. As a result he spent the aborted league campaign trying to catch hold of the task. After the uncertainty of lockdown, he was faced with the departure of one of one of his best players, Jack McCaffrey, who decided to walk away from the county scene.

Farrell had developed a bit of a reputation as an unlucky general at under-age despite winning All-Irelands at minor and under-21. That impression was hardly dispelled by his taking at comparatively short notice the job of replacing a five-in-a-row manager but things picked up for him as the year progressed.

It was impossible not to be impressed by the positive demeanour of Dublin’s club players, granted like their peers everywhere else in the country a free run in fine conditions and good weather to play with their local teams.

One example will do. James McCarthy’s emotion after Ballymun had finally won a second county title - their campaigns often undermined by the number of exhausted county players they had to field in the weeks after All-Ireland winning summers - was genuine.

“It was mad. We started training this year and I got to know all these young lads well, brilliant footballers, brilliant, brilliant footballers. We just got to train together properly for three or four months and you could see us getting better every game and we just knew something was snowballing and it’s great to win it.”

He and three team-mates would make it all the way to last Saturday’s All-Ireland, revived by the club season and not drained for it.

Farrell had a fairly consistent selection policy from the resumption of intercounty in October. Three players made a first start in an All-Ireland this weekend: Robbie McDaid, the capable Ballyboden wing back, making the most of McCaffrey’s ennui, Seán Bugler who had been a member of the supporting cast under Jim Gavin and Paddy Small who had come on as a replacement in the previous year’s final against Kerry.

They weren’t stretched in Leinster, as has become the norm and without the decompression chamber of the round-robin quarter-finals it was straight into an All-Ireland semi-final.

Evidence that Farrell’s luck was changing emerged abundantly the weekend of the Bloody Sunday centenary. The Dublin manager’s greatest discomfort on an evening when Meath dissolved in the Leinster final was taking questions about why his team was breaking the championship.

He protested not unreasonably that all he was trying to do was win a match.

By then the team thought most likely to terminate the champions’ lease on Sam Maguire had fallen to one of those freakish occurrences that seem to befall Kerry from time to time. In fairness to Cork they had put themselves in a position where a late goal would undo their ancient tormentors and managed to execute it.

The late Eugene McGee said after his Offaly team had undone the five-in-a-row in 1982 that the only way to beat Kerry was to stay in touch and get a late goal. I used to feel that this formula was more descriptive than prescriptive but on an evening of sheeting rain in Páirc Uí Chaoimh, Cork filled the prescription.

The day after the Leinster final was the highpoint of the championship in many ways. Cork’s jubilation proved short-lived when Tipperary won a first Munster football title in 85 years and later that afternoon, an inspired Cavan upended hot favourites Donegal in the provincial final - a first Anglo-Celt trophy since 1997.

For Dublin, the abrupt departure of the two counties most expected to cause them trouble, Kerry and Donegal would leave them face-to-face with their most familiar rivals of the past decade after the races of Cavan and Tipperary were run in one-sided semi-finals, leaving the champions and Mayo as the last teams standing.

Mayo’s rebuild took them from relegation in October - largely on the back of poor displays in the spring - to a first Connacht title in five years. Spared the rigours of a rambling qualifier campaign James Horan’s team came to the All-Ireland rested and bristling with energy generated by a number of young players.

Dublin’s breaking of new ground with a sixth All-Ireland in a row was enhanced by the competition Mayo offered on Saturday, which finally forced some problem solving on the champions.

James Horan’s team forced a miraculous turnaround on the restarts, convincingly winning the kick-out wars and a number of his match-ups worked well with Dean Rock quiet and centrefield on top until the second-half arrival of Brian Howard challenged this and also seemed to liberate Brian Fenton, who had been out-of-sorts until then.

Ultimately though, the two fire-starters who needed to be subdued, Con O’Callaghan and Ciarán Kilkenny got in telling blows. Mayo didn't look like scoring goals and goals won it for Dublin.

One poignant aspect of the final was the likelihood that we may have seen the last of many warrior names on both sides. Cian O’Sullivan and Paddy Andrews weren’t on the Dublin bench and neither were Colm Boyle and Donal Vaughan for Mayo whereas Michael Darragh Macauley and Kevin McManamon saw no action nor did Tom Parsons and Keith Higgins.

Maybe the fact that next year’s final is a mere seven months away will stay the hand of anyone getting ready to sign out but as James Horan said afterwards, the world moves on.

The greatness of the champions is in their ability to win matches no matter how unexpected the challenges and by the remorseless way in which they inflict their game and processes on opponents with small margins in the contest.

There hasn’t been a sense that the gap between them and the field is expanding and there will be gnashing of teeth in Kerry and Donegal but they are still there, on top of the game - defiant and unyielding.