Brian Fenton remains the master and commander of Dublin’s destiny 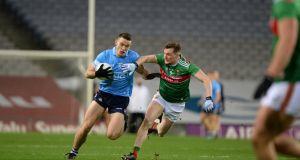 Watch Brian Fenton. Watch how Mayo are watching out for him. Watch and see has Fenton still got that capacity to dig and search and dig deeper again, when all he’s ever known is winning matches in his six years of playing championship football with Dublin.

Watch what happens when Dublin suddenly appear that they may be beatable here, when Fenton is being outshone and at times outplayed at the halfway point of a game more delicately poised than most imagined or even dreamed.

Then sit back and watch how Fenton just as suddenly ends that debate, still the master and commander of Dublin’s winning destiny and fate, still the best all-round footballer in the land.

That makes it six-in-a-row for Dublin, six-in-a-row for Fenton and, with that, extending his own unique record of unbeaten championship matches since Jim Gavin announced him as Dublin’s new midfielder at the start of the summer of 2015. The Raheny man came into that summer with no great reputation, and finished it with a man-of-the-match performance in the final.

Dublin are now 42 championship matches unbeaten, winning 39 and drawing 3, and Fenton has started in 41 of them (sitting out one Super 8s when Dublin didn’t need to win).

Still only 27, Fenton is also in a clear line for another All Star, resigning Mayo here to losing All-Ireland final number 14, since their last win in 1951, this their fourth loss in eight years to Dublin.

In a game that went from zero to 60 in 13 seconds, Dean Rock scoring the fastest goal in All-Ireland football final history, Fenton needed some time to find his usual presence.

After Mayo responded with three unanswered points of their own, Fenton makes a start of it, walking the ball in towards Eoin Murchan before Paddy Small wins a free. Rock converts and Dublin are ahead again. Fenton then plays a hand in Dublin’s next score too, holding onto the possession to draw another foul, again converted by Rock.

In the next play, Fenton tries a little harder to force his presence, sniffing out his first scoring chance of the evening, striking firmly off his right boot, only to see it drift left and wide. The sides remain level, until Mayo edge themselves in front for the first and last time, scoring two on the trot thanks to two marks from Cillian O’Connor, who looks to have Davy Byrne in a spot of bother two.

Still, Dublin are being matched all over the field, Fenton’s territory included. In the 25th minute, he’s back defending on Dublin’s own endline, caught in the leg by Cillian O’Connor, not looking too pleased about it.

Fenton has been here before: two years ago, when Tyrone were Dublin’s final opponents, Conor Meyler, a late replacement for full forward Richard Donnelly, straightaway went in on Fenton - or rather into his face and ear and everything else within reach of it.

Then, when Dublin’s heads were needed in the second half, Fenton was always there, turning the kick-outs irrepressibly in their favour, 29 of 31 won by the end, and with that directly influencing those around him. Last year, Fenton got, by his own admission “a little roasting” in the drawn final against Kerry, only to promptly turn that around in the replay.

Dublin were struggling with their kickouts in the first half, winning only five of their own, compared to Mayo’s 11; in the second half, Fenton would restore some back there too.

Because into the second half, Fenton’s patience and perseverance quickly begins to pay off handsomely, his head still held unfailing high, holding up the ball four minutes into the second half with that play resulting in a first score for Niall Scully. Dublin 2-7 Mayo 0-10.

Two minutes later, as if on cue, Fenton turns, spins and drops Diarmuid O’Connor, and makes no mistake this time, scoring his latest trademark point from play. Dublin 2-8 Mayo 0-11.

Stephen Coen wins and scores the next mark, before Fenton claims the kickout, his mind appearing to turn towards Ciarán Kilkenny, how to bring him more into the game. Two passes are sent straight into his vicinity, the move in the 58th minute so doggedly persisted by Kilkenny that he eventually gets his first point of the match: Dublin 2-10 Mayo 0-14, the game now at the axis of its turning point.

And again Fenton’s shows the way, Dublin moving the ball across several lines in the middle of the field, before Fenton passes off to Scully, who in turns sets up Brian Howard for his point, a move with the Raheny club mates written all over it. Howard is now likewise unbeaten in a Dublin jersey, collecting his fourth All-Ireland.

There is another move that perfectly illustrates Fenton’s now loud influence: Darren Coen gets another point back for Mayo, seemingly keeping their hopes alive, only for Fenton to win the Dublin kickout with a perfectly executed mark. It helps set up Dublin’s last score, and the last of the night, when Davy Byrne also completes his return to form to set up Kilkenny’s second.

For the closing minutes, Diarmuid O’Connor - once hanging off him - Matthew Ruane at other times, are left chasing Fenton’s shadow under the Saturday night floodlights. Dublin 2-14 Mayo 0-15, game over.