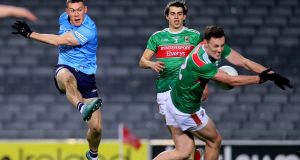 Dublin’s Con O’Callaghan has his shot blocked by Diarmuid O’Connor of Mayo during the All-Ireland SFC Final at Croke Park. Photograph: James Crombie/Inpho

Dublin and Mayo served up a riveting All-Ireland final for three-quarters of the contest. It was 2-9 to 0-14 at the final water break, 55 minutes and five seconds gone in the match.

Far below us, the Mayo players gathered together for a last huddle. This is it. They looked relaxed. It was possible then to believe that the emptiness of the stadium would suit them: that we might be watching the history boys. It was a gorgeous night in Dublin city: crisp, still, a big moon hanging low over the stadium. And it’s that time of year for make believe: sleigh bells ringing, all of that. The two teams trotted out for the last quarter.

And maybe it didn’t make it through the television frequencies to the living rooms of Ireland – and to the Mayo homes where the mood must have one of general cardiac arrest. But something left the game. The tension drifted out of the big stadium.

It was nothing Mayo did or didn’t do. Instead, a kind of realisation seemed to descend on Croke Park that James Horan’s young team had been holding reality at bay all night. Yes, there was a moment when young Eoghan McLaughlin, who doesn’t so much run as ride as a Kawasaki Ninja, ran a straight, open lane through Dublin’s defence and saw it all before him even as he caught the ball. And he dropped it: a forgivable, rookie mistake. But Mayo needed moments of fabulousness to become real: to enter the Séamus Derby book of immortal moments. Instead, an alternative history vanished.

And then, Ciarán Kilkenny kicked a fine point at the other end of the field. Brian Howard, lesser-spotted all championship, stepped up and struck another gorgeous score. Paul Mannion, another All Star calibre player operating on limited minutes, hit a free. And just like that it was the 62nd minute and 2-12 to 0-14 to Dublin and the game, the night, the 69 long years: it was all just out of Mayo’s grasp.

They gave it all they had. And it wasn’t enough.

You can’t score without the ball. In the 10 minutes immediately after half-time, Mayo were ostensibly in a very good place: facing into a second half trailing by just a single point and ready to exploit the fact that Robbie McDaid had been black-carded.

Dublin would spend 10 minutes with 13 outfield players. There would be no repeat of last year’s second-half deluge of Dublin pressure. And there wasn’t. Instead, Dublin played keep ball, happily moving it around the field as if they were on a Sunday afternoon spree in the Phoenix Park.

And there was, simultaneously, a notable flagging in Mayo’s collective energy. The floodlights were bright and the shadows long and suddenly the All-Ireland champions looked comfortable. And it was as though Mayo suddenly realised that they had another 35 minutes and then added time in which to chase and run and work to get the ball back – before they even thought about getting scores.

If you want to figure out what Dublin are about, then Niall Scully is probably a good place to start. The Synge Street man is probably the least mentioned player of this Dublin collective and that’s kind of appropriate. He plays the game like a ghost, moving with stealth around the periphery of the coalface. But at the same time he is everywhere, all the time: available for every outlet pass, always covering, always perfectly placed and ever moving the ball on.

There will, understandably, be several florists’ worth of bouquets flung at the feet of Brian Fenton, of Ciarán Kilkenny and of Con O’Callaghan after this sixth consecutive triumph, the Cuala sharpshooter taking away the crystal for man-of-the-match.

But Scully was the most valuable player on the field on Saturday night. He didn’t waste a single possession and his role in the second goal was emblematic of the kind of loitering with intent he has been at since he broke into the team.

Dublin break forward, Mayo are tackling like mad and the game has become the kind of breakneck, close quarters fast-hands ball that the Dubs love. There’s a reason they love it. And that reason is free for everyone to see in the warm-up, when they play seven on seven passing games in incredibly tight spaces.

Cillian O’Connor, after a monstrous first quarter, has tracked back and finds himself with Scully to the right of David Clarke’s post. But O’Connor is not a corner back. His eye is drawn to the ball during this moment. Scully, meanwhile, looks as innocuous as a lad waiting for the bus into town on a sleepy Sunday – until O’Connor moved instinctively towards the ball. Now alone and unmarked, Scully was alive and urgent – and silent. The ball came his way. Most players, in that position, would have a goal in their mind’s eye. Scully looked up, saw a blue jersey – it was O’Callaghan but any of the 70s Dubs could have wandered in from their living room arm chairs and finished it. The pass was no fuss perfect. Then, he returned to his role of near invisibility, keeping all the cogs turning. He kills teams and they don’t even notice him.

Mayo managed just one point from play in the second half. They couldn’t get the ball. It was their huge heart and physical intensity – Oisín Mullin, Aidan O’Shea, Diarmuid O’Connor and Kevin McLoughlin were phenomenal over the first hour. But in the end, they were gassed, struggling to live with Dublin’s easing through fourth and fifth gear well into the 70th minute.

Can any team live with them? The question grows louder. Mayo gave them their only real game but in the end, Dublin won it with an ease and imperious authority that will dismay all other contenders out there – and make more urgent the debate over what to ‘do’ about the city game.

“Savage team and they’ll always have that level of force and intensity,” said Jonny Cooper generously of Mayo afterwards.

“You expect it but only when you are in it you try and figure it. We had to readjust and up the tempo a little bit. We managed to control it a little bit and then when we got the full complement back we managed to push on a little bit. But they were there or thereabouts. There is a bit of experience too because we have been there before. We know how to stay calm and execute. And being able to execute under pressure was the key one for us.”

And that know-how contributed to the disconcerting sense of inevitability that settled over the occasion in the last quarter. As Cooper spoke, Brian Fenton stood alone in the middle of the floodlit field, chatting with someone on the phone. The place was empty and serene. The strange thing was watching the senior statesmen of the Dublin squad – Michael Darragh Macauley and Kevin McManamon, neither of whom played, congratulating the on-field players. New faces take the limelight. Dublin brought 10 new players in this year for Dessie Farrell’s first season. And no manager was under more pressure in 2020.

“Delighted is the word,” Farrell said.

“Obviously a bit of relief in there too. I am thrilled for the players: it has been a long long year. I am so happy that they got the result tonight and it is a just reward for how they applied themselves throughout the year. And delighted for their families. It is unfortunate that they couldn’t be here.”

But they’ll be back. On many, many All-Ireland days. The All-Ireland year ends on the familiar sight of Stephen Cluxton holding aloft the Sam Maguire again and again and again. The new year and the new season is just around the corner.