An overnight sensation aged 27 - Robert McDaid ‘over the moon’ 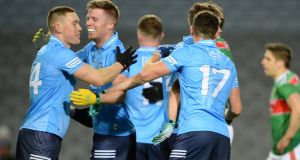 While some of Dublin’s team basked in the glory of an eighth All-Ireland triumph, Robbie McDaid was winning his first on the pitch aged 27.

The wing back, in his breakthrough season, had scored 1-4 en route to Saturday’s final, and put in another solid shift here despite receiving a black card just before half time.

“It probably happened at a great time just before half time,” explained the Ballyboden St Enda’s defender, who has been in excellent form for his club over recent years, when asked about his black card. “We got to come in and re-set and re-focus. I thought it was a bit harsh on me to be honest but I won’t say much more.”

There was one point between the teams when McDaid returned to the action in the 46th minute. Dublin’s lead had been cut by just 0-1 in his absence and for the remainder they took a firm grip of proceedings.

Con O’Callaghan is three years McDaid’s junior and was collecting his fifth All-Ireland medal. Man of the match this time around, the Cuala attacker says the Dubs have no plans on easing up despite six in a row.

“No, no,” explained the dual player who scored 1-1 while terrorising the Mayo defence for a second year running. “Every new year starts again and look it’s a massive challenge for us every year to go out and we want to win the All-Ireland every year. So we never get tired of that and when it comes off it’s beautiful.”

“We know we have done something special here. And we’re going to enjoy this time even if it’s only within out little bubbles.”