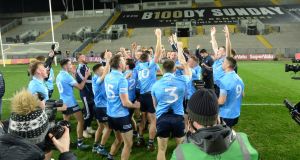 Dublin celebrate after the victory over Mayo in the All-Ireland Final at Croke Park. Photograph: Dara Mac Dónaill

Ah God Mayo, how much more can ye take? Hearts smithereened all over again, still searching for a vaccine for, well, the Dubdemic.

RTÉ had started their coverage with a very lovely montage set to ‘The Impossible Dream’ which mentioned ‘unbeatable foes’, ‘unreachable stars’ and such like, so it was painfully apt. Come the end of it, though, the words “NOT ALL DREAMS ARE IMPOSSIBLE” filled the screen.

By full-time, all you could say was: ‘Some of them feckin’ well are.’

Over on Sky, meanwhile, Normal Person Paul Mescal was narrating their equally sob-inducing intro. For 10 months we’d been craving some class of normality, and it took the Dubs to provide it. Ready yourself for a ‘Seven Would Be Heaven’ themed 2021.

And this final was, of course, heavily Christmas-themed, even aside from all the letters Mayo folk had sent to Santa asking for Sam and nothing else, forget the selection box. Not even a surprise? Well, after 69 years awaiting, Sam would have been the mother of all surprises.

“It’s a silent night at Croke Park,” said Joanne Cantwell, maintaining the Christmassy theme, Ger Canning extending it further. “It’s a bit like an advent calendar, it’s time to peal back the final entry in this Championship.”

The saddest sight was the team buses arriving at the stadium greeted by supporters who were locked out. On the off-chance that Mayo might win, you’d have been thinking that 82,300 of them should have been put on the vaccine priority list so they could have been in Croke Park, them having been key workers on the frontline of hope for 69 years.

How hopeful were the panel that Mayo could do it? “I fancy Dublin by seven or eight . . . at least,” said Colm O’Rourke, so no hope at all, him even trying to quote Mike Tyson about having the best laid of plans and then getting punched on the nose.

You do, of course, look for omens on a day like this, even though they’re completely meaningless. And the one that you couldn’t but spot was the green and red lights on the Defence Forces’ helicopter that flew over the stadium ahead of the national anthem. It was, though, still audible as it headed for home when Dean Rock scored that goal on 13 seconds. As an omen, then, that one seemed faulty, a punch on the nose, even.

Half-time, the Dubs two points up. A shemozzle in the tunnel. Oisín McConville purred. Not enough teams, he reckoned, dare to shemozzle Dublin, so he saw this as a positive development for the Mayo faithful. Colm downplayed it. “I often got a belt from my mother with a wet dish cloth for kicking a ball through a window, it was harmless enough what happened in there,” he said.

Second half. And by the end of the third quarter, when it was water break time, there was only a point between them. It was a humdinger. And then Dublin decided we’d had more than plenty entertainment, so fiddled with their gear stick, found fifth, and that was that. Mayo crushed. Dublin never more alive-alive-o.

Stephen Cluxton’s victory speech was almost as short as the gap between throw-in and Rock’s goal, the sight of an empty Hill 16 most probably leaving him feeling there was no point in chatting at length. The weirdest of days, but the most normal of them too. Dublin: All Ireland winners.

Not even Ger could offer Mayo a sinew of hope. “That’s 10 All-Ireland finals that the county has lost since 1951 – and it’ll go on and on for another while because this Dublin team hasn’t finished with just six.”

Seven, after all, would be heaven. That dream, you’d suspect, is not impossible. Hats off, a team like no other.