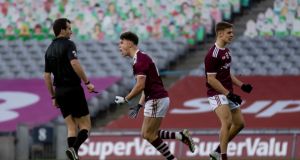 Galway captured their sixth Under-20 All-Ireland title with a deserved win at Croke Park in a game where they never trailed.

Donal Ó Fatharta’s men were full value for their victory after a polished performance throughout when they had to overcome a couple of injury set-backs but never lost control.

Galway deservedly led by 0-8 to 0-5 at half-time. Their ability to put enormous pressure on the Dublin kickout led to plenty of possession and the Tribesmen used it well.

Senior player Paul Kelly was constantly on the ball for Galway and they used the possession well up front and after Matthew Tierney and Dublin dangerman Ciarán Archer exchanged points, Tomo Culhane and Tierney found the range to lead by 0-3 to 0-1 after seven minutes.

Lee Gannon, Mark Lavin and Brian O’Leary landed good points for Dublin and the sides went into the water break level at 0-4 apiece, with Culhane getting his second point for Galway. But they suffered a blow when wing back Cathal Sweeney, another player with senior experience, went off with a leg injury.

Two more points from Culhane and one from Matthew Cooley helped Galway lead by three after 27 minutes and they took that advantage into the break when Tierney got his third point after Luke Swan had finished off good Dublin passing movement with a point.

Galway suffered another blow when impressive midfielder Cian Hernon had to go off when he was injured winning the throw-in at the start of the second half but they extended their lead when Culhane struck his fifth point.

Brian O’Leary responded immediately for Dublin but then a good move after a turnover by Jonathan McGrath saw Conor Raftery send Tierney soloing through from the right and he passed across for Culhane to shoot low to the net to lead by double scores at 1-9 to 0-6 after 37 minutes.

Dublin didn’t panic and points from Lavin and Lorcan O’Dell cut the gap and after Culhane and Adam Fearon exchanged points, Lavin cut the gap to a goal with nine minutes remaining with his third point.

They got it down to a point with three minutes left thanks to efforts from O’Dell and Lavin, before a superb free from Tierney from 40 metres left two between them going into the start of four minutes of injury-time.

Fearon reduced the margin to the minimum after 62 minutes, but Galway, with captain Jack Glynn keeping a tight rein on Archer throughout, held on for a deserved win.