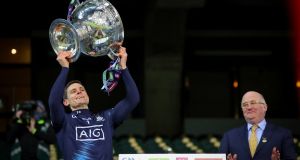 Leave Santa’s sleigh up on its blocks, tell the elves they’re furloughed. Dublin were in no mood for fairytales here as they completed the six-in-a-row. They overcame a Mayo side that was as dogged and willing as anything they’ve come up against all year and shook them off in the closing quarter. What, you thought 2020 was going to post a miracle through the letterbox on its way out?

Dessie Farrell’s side had to go some to earn this one. Mayo matched them a good portion of the way and were only a point down at the second water break. But in all truth, they at no stage had the champions in peril. Looking over the shoulder, yes. Worried about what they saw, probably not.

Mayo just gave themselves too much to do in the end. Their facility for digging holes to drag themselves out of remains unparalleled. The opening here was like that Twitter meme, beloved of the political class across the water, where Boris Johnson is sitting on a park bench sheepishly listening to the BBC reporter Laura Kuenssberg.

“What was the one thing you weren’t supposed to do above all else?”

“Give away an early goal.”

“Left Dean Rock free at the back post while James McCarthy ran straight down the middle of the defence after 13 seconds.”

After Eoin Murchan’s goal in the replay last year, it meant that Dublin have scored a goal from the throw-in in two All-Ireland final halves in a row. To Mayo’s credit, of course, it barely turned a hair on their head. They were level soon after, through two points from Cillian O’Connor and one from Oisín Mullin. Three minutes in, Dublin 1-0 Mayo 0-3. Game on, and then some.

This was the stuff. All year, we had wondered what sort of gear Dublin had access to when tested. They must have wondered themselves. Well here, for the first time since last year’s final, the opposition wasn’t handing them the kick-out. They weren’t allowing Brian Fenton to stroll around untouched or giving Ciarán Kilkenny the latitude to show everyone what a wizard he is. Mayo were ploughing into Dublin and asking them questions they don’t often have to answer.

As you would expect, very often they had them. Rock tapped over a couple of frees before Seán Bugler found his range. Both moves came from poor Mayo giveaways and for a minute or two it looked like business as usual.

But Mayo weren’t having it. They rattled into it and duly kicked five points in a row. Cillian O’Connor was in his element, intercepting a crossfield ball to nail a point from 35 metres and following it up with two marks inside a minute. Ryan O’Donoghue was loving life in his first All-Ireland final, darting like a goldfish, snapping like a piranha. By the 21st minute, they were 0-8 to 1-3 ahead.

If ever Mayo needed to be the team to get the next goal, they needed it now. But Mayo’s story is what it is because of the kind of thing that happened next. Con O’Callaghan had been bottled up superbly all game by Mullin but a moment’s hesitation let the young master in 25 metres from goal. A one-two with Niall Scully and he punched Dublin’s second goal. Mayo had it all to do again.

To and fro it went. O’Connor drew Mayo level, O’Callaghan pushed the Dubs ahead. O’Donoghue and John Small swapped points. Kilkenny finally landed a score after two bad wides. It all washed out at a two-point lead at the break for Dublin, 2-6 to 0-10.

Going in a couple of points down was poor value for the work Mayo had put into the half. They had a chink of light in the fact that the last act of the half was a black card for Robbie McDaid. It meant Dublin would play the first 10 minutes of the second half with 14 men.

The Dubs didn’t find all these All-Irelands down the back of the couch though. They came out and managed those 10 minutes at their ease. They talked each other through their possessions, didn’t give anything away too cheaply and kept Mayo at bay until restored to their full complement. Mayo won those 10 minutes all right but only by a point. And even at that, Mayo were reduced to frees and marks to keep the scoreboard ticking.

At the second water break, Dublin led 2-9 to 0-14. If you had offered that to Mayo before they game, they’d have eaten it in a single gulp. And yet, the effort it took to get there left them looking gassed for the final push. They only scored a single point the rest of the way.

Dublin did as Dublin do. Having struggled to get a foothold around the middle all night, they started taking kick-out marks, first through half-time sub Brian Howard, then through the previously ineffective Fenton. Kilkenny was playing inside on Stephen Coen now, with Paddy Durcan having departed injured at half-time – and just like that he was Ciarán Kilkenny again. Two kicks at goal, two points.

Paul Mannion came off the bench to stroke a free and by the 62nd minute, they had their biggest lead of the day, 2-12 to 0-14. And that was that, really. Mayo tried the odd long ball into Aidan O’Shea but didn’t get enough bodies in around him.

To the Dubs the spoils, then. The year ends like we all imagined it would back in January. In a year when nothing was as it seemed, they remain unremittingly, unrelentingly themselves.