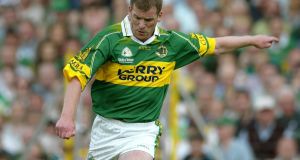 Kerry’s Dara Ó Cinnéide: “We had underachieved as minors. And that hurt us so badly.” Photograph: Lorraine O’Sullivan/Inpho

In the autumn of 1997, Dara Ó Cinnéide got a letter from a friend from Co Louth who he had studied alongside at the University of Limerick (UL). It was primarily a congratulatory note after Ó Cinnéide had just won his first All-Ireland, but it was also a means of reminiscing through a significant part of that journey.

One of the themes stemmed from a random moment in 1993 when Ó Cinnéide and his friend were walking into college and the Kerry man had an epiphany, before loudly and unashamedly declaring it.

Kerry were in the middle of one of their biggest recessions. Ó Cinnéide’s minor career had amounted to a couple of low-key losses against Cork. There wasn’t any guarantee that Ó Cinnéide would even wear a senior jersey, but he still believed that the future would be paved with gold.

“I wasn’t arrogant but there was never any doubt in my mind that I was going to win All-Irelands. I knew from looking around me in college that the Kerry lads were the better players. I just couldn’t understand why we didn’t have minor medals. We had underachieved as minors. And that hurt us so badly.”

The UL team which won the 1994 Freshers All-Ireland was packed with a raft of players from the unsuccessful Kerry minor teams of 1992 and 1993.

“We lived together, and we made a pact that we wouldn’t be drinking and that we would just train and train,” says Ó Cinnéide. “There was a raw, ravenous hunger there. I often think back and wonder if had we won as minors would we have felt like mini-celebrities around UL, and always been in the college bar?”

If the theory that being unsuccessful at minor level, especially when losing an All-Ireland final, can provide the ideal pathway and grounding for future intercounty seniors, the Dublin minor team of 2011 is the most salient case study.

Nobody could have known at the time that they were a golden generation, but the rich harvest was reaped from a black winter.

“I remember when we lost that minor [football] final against Tipperary, myself and Jack[ McCaffrey] were in the showers afterwards,” recalled Ciarán Kilkenny last year. “Our attitude was ‘let this hurt drive us on and hopefully we won’t be in this situation again’.”

Dublin haven’t been. Kilkenny, McCaffrey and Mannion won All-Ireland U-21 medals in 2012, while the bulk of the 2011 minor squad – which included Fenton by then – secured the 2014 All-Ireland U-21 title.

Kerry followed a similar path in 1995 and 1996, winning successive All-Ireland U-21 titles. “Those minor defeats turned us into brilliant U-21 teams,” says Ó Cinnéide. “And those two teams provided the backbone of the 1997 senior team.”

Prior to the 2011 Dublin team, the Galway minors of 1994, which lost the final to Kerry, was considered one of the greatest minor teams. Eight of that side – Declan and Tomás Meehan, John Divilly, Paul Clancy, Michael Donnellan, Padraig Joyce, Derek Savage and Richie Fahey – went on to win All-Ireland senior medals. It was the most since the Kerry minor team of 1970 – beaten by Galway in that final – which supplied seven players to the county’s phenomenally successful All-Ireland senior crusade.

“My father always said that one of the best things that could happen a young player was to lose an All-Ireland minor final,” says Declan Meehan. “That was definitely true with our team. The 1995 team was supposed to be even better again. Joyce, Donnellan, Derek Savage and Tomás were all underage, but they lost a semi-final to Derry.”

Going by that criterion – good enough for the elite level but still hungry to go to the next level – Mayo should have cleaned up. They were just unlucky to be around at the same time as this Dublin side, but Mayo still got the numbers through; seven of this year’s side featured in the four All-Ireland minor finals Mayo lost in the 2000s.

“I wouldn’t say it’s a recipe for success to lose a minor final, but it certainly hardens you,” says Meehan. “Donnellan was a rare talent, Joyce was developing into the great player he became, but there was no sense of entitlement with that group in 1994. We didn’t know where we were going.”

Most young players don’t. Sport at its most visceral is often based on drive and hunger, of a group coming together and sharing experiences until those experiences harden into something more real. There are just never any guarantees it ever will happen because the future is mapped out by choice, commitment, ambition, and how far players are prepared to go to fulfil that ambition.

“It was strongly worded,” says Ó Cinnéide. “It more or less said you can clear off now or else you can play with Kerry someday. You have a choice, you can go bitching and moaning about how we were unlucky and hard done by. Or else you can do something about it.”

The Dublin minors of 2011 certainly used that hurt like rocket fuel. And it has propelled Dublin into another stratosphere.