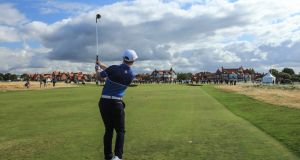 Conor Purcell of the Great Britain and Ireland team plays his third shot on the 16th hole in his match with Alex Fitzpatrick against John Augenstein and Andy Ogletree. Photograph: David Cannon/Getty Images

England’s Alex Fitzpatrick led from the front by beating world number one Cole Hammer as Great Britain and Ireland claimed a two-point lead heading into the final day of the Walker Cup at Royal Liverpool.

Level with the United States at 2-2 after the morning foursomes, the home side won the afternoon singles 5-3 thanks to victories from Fitzpatrick and compatriot Conor Gough, Scotland’s Euan Walker and Sandy Scott and Ireland’s Caolan Rafferty.

And it could have been even better for captain Craig Watson’s side as British Amateur champion James Sugrue lost the last two holes to slip to defeat to John Pak, while Conor Purcell and Tom Sloman were beaten by John Augenstein and Brandon Wu respectively.

Fitzpatrick recovered from being two down after three holes to beat Hammer by two holes in a scrappy but entertaining affair, the 20-year-old impressing his older brother and Ryder Cup player Matt with a vital birdie on the 15th and nerveless tee shot down the last.

“I’m delighted for him,” five-time European Tour winner Matt Fitzpatrick said. “I thought he played pretty solid all day, his chipping wasn’t up to much this afternoon but he putted well so that was a big difference.

“He’s always been, in your face isn’t the right word, but he’s not really sacred of anything, he’ll take anything on. It could be little kid against big kids and he’d shove them over.

“I didn’t really want to get involved, he’s got all this way on his own. I’m pulling my hair out out there saying, ‘why’s he hit that shot?’ but I’m not going to go drag him to the range and say this is how you do it.

“He showed down the stretch when he hit some great shots that he can handle the pressure.”

Alex, who had partnered Purcell to a foursomes victory over Augenstein and Andy Ogletree in the morning, added: “It’s a bit of pressure I must admit. It was a great game, he (Hammer) got one over on me at the US Amateur so it was nice to get one back on him. He deserves to be world number one, he’s such a good player when he’s on form. I just happened to catch him on not such a good day.

“I felt like I’ve been playing really well this week and felt up to the task so I was pleased when I saw they put me out first and saw his name. I enjoy challenges and today was quite a big one to face but I’m happy I succeeded.”

Fitzpatrick and Gough were the only two home players to enjoy a 100 per cent record on the opening day, Gough having partnered Harry Hall to a foursomes win over Stewart Hagestad and Akshay Bhatia.

The singles wins for Walker and Scott made amends for their foursomes defeat to Pak and Isaiah Salinda,

Walker beating Steven Fisk by two holes and Scott holding his nerve to beat Ogletree on the 18th. The home side need six-and-a-half points from Sunday’s four foursomes and 10 singles matches to regain the trophy and claim a sixth win from the last seven contests on home soil.

Oisín Murphy handed three-month ban after testing positive for cocaine 17:20
Connacht’s game against Ospreys the latest Pro 14 fixture to be postponed 16:31
Paul Kerrigan calls it a day after 13 years with the Cork footballers 14:39
Diego Maradona buried as world mourns flawed soccer great 09:17
Neil Lennon insists he is the man to turn it around for Celtic 08:58
Here is your handy guide to sport on television this week