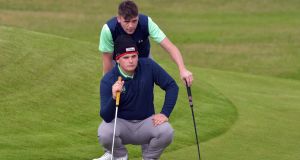 Ireland’s James Sugrue and Robert Brazill lining up their putt on the 9th green during day one of the 2019 Home Internationals at Lahinch Golf Club. Photograph: Pat Cashman

The debutants impressed on day one, but Ireland’s hopes of clinching a fifth Home Internationals win in six years suffered a major blow when they lost 8.5-6.5 to Scotland on the opening day at Lahinch.

They now need to beat favourites England on Thursday to keep their title hopes alive, and while they are up for the fight they will need to improve to beat the favourites, who thrashed Wales 12-3, dropping just half a point in the singles.

The hosts drew the foursomes session 2.5-2.5, but took just two wins from the 10 singles through debutant Robert Brazill and veteran Colm Campbell.

Amateur champion James Sugrue sat out the afternoon after the back injury that hampered him in the Walker Cup flared up in a 3&2 foursomes loss with Brazill to James Wilson and Connor McKinney.

Matt McClean came in for him in the afternoon, claiming a half, and will partner Brazill in Thursday morning’s foursomes as Sugrue rests his ailing lower back.

Teenager Tom McKibbin partnered Campbell on his debut, picking up a half in the foursomes that also saw Keith Egan win on his debut alongside Conor Purcell.The 16-year old Holywood star could not deliver a point in the singles, however, but he did impress Scotland’s playing captain Matt Clark, despite losing by two holes in a stiff westerly breeze.

“I’m only giving up 21 years to Tom,” said 37-year-old Clark. “He’ll take it tough. He’s been beaten by an old, fat man effectively, but that’s part of the game. He’s a super talent, he’s a super nice young man. He was a joy to play with.

“He has all the talent in the world. I don’t think his game is necessarily suited to links golf. He hits it very high, creates a lot of spin, which when you get a blowy, Irish Lahinch day is not ideal.”

1 Pete Sampras: The forgotten great with the best serve in the business
2 Cam Newton broke the mould: Can his flame be rekindled at the Patriots?
3 Tipping Point: DeChambeau’s transformation raises questions, but who will ask them?
4 Klopp to rest Lallana to ensure he remains fit for transfer
5 Tuilagi case shows England’s home-based clause is out of date
Real news has value SUBSCRIBE