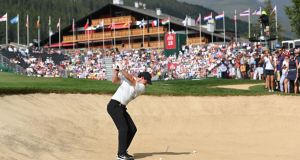 Rory McIlroy plays a shot from the bunker on the 18th hole during day three of the Omega European Masters. Photograph: Stuart Franklin/Getty Images

Three late bogeys dropped Rory McIlroy to 11-under par but the Irish golfer remains just three shots off the lead with 18 holes to play at the Omega European Masters in Switzerland. Andres Romero opened up a one-shot lead heading into the final round but Ryder Cup stars McIlroy and Tommy Fleetwood were well in contention.

Argentina’s Romero’s hopes looked to be fading when he dropped three shots in his opening five holes and McIlroy and Australian Wade Ormsby established a two-shot lead. But as McIlroy and Ormsby produced late stumbles, Romero came home in 31 to sign for a 66 and lead the way at 14 under.

The 38-year-old produced a brilliant run of scoring on the back nine, going birdie-eagle-birdie-birdie from the 13th to edge a shot ahead of Ormsby, who bogeyed the last in his round of 67. Fleetwood had bogeyed the second, third and sixth playing alongside Romero but birdied the ninth, 12th, 14th, 15th and 17th to sit at 12 under alongside Malaysia’s Gavin Green.

“It’s easy to get down on yourself,” Fleetwood said. “It was a terrible start but I didn’t do that much wrong. I had a good finish. It’s that kind of golf course where you can get hot. Tomorrow I definitely need a better start but the back nine, need more of that.”

World number two McIlroy arrived in Crans Montana just hours after lifting the FedEx Cup in Atlanta on the PGA Tour and showed signs of fatigue as he bogeyed three of his last five holes to sit three shots off the lead after a round of 69.

“I felt a little flat out there, a little tired,” he said. “Maybe it just all caught up with me. I’m looking forward to getting to bed early and getting a good night’s sleep. I played pretty solid, made those mistakes coming in. If I go out and play a good front nine tomorrow I’ll be right in it.”

1 World Rugby study advises removal of reset scrums to reduce Covid-19 risk
2 Ken Early: Liverpool fans, Bamber Gascoigne and a close shave in Istanbul
3 How Mary Pierce stepped into the light and played for herself
4 Tiger shines and Brady bites back as charity match proves an enjoyable release
5 Sideline Cut: Vignette shows why Bird is the true shark in The Last Dance
Real news has value SUBSCRIBE