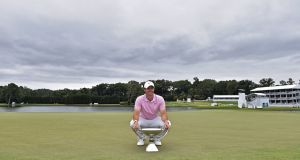 Rory McIlroy poses with the FedEx Cup Trophy. McIlroy has been named the PGA Tour Player of the Year for 2019. Photo: Austin McAfee/Icon Sportswire via Getty Images

Rory McIlroy added another award to his trophy cabinet as he was named the PGA Tour Player of the Year on Wednesday for a third time following a 2018-19 campaign capped by his FedExCup championship triumph.

The 30-year-old Northern Irishman beat out Brooks Koepka, Matt Kuchar and Xander Schauffele in a vote by players for the Jack Nicklaus Award.

McIlroy, who won the award in 2012 and 2014, made 17 of 19 cuts while racking up three victories, including at the season-ending Tour Championship where he also claimed the FedExCup.

The four-times major champion’s other victories came at The Players Championship and RBC Canadian Open, where he set a tournament record and won by seven shots – the largest winning margin of the season.

PGA Tour Commissioner Jay Monahan said in a statement: “While there are a number of honours one can receive in this game, PGA Tour Player of the Year has to be among the most satisfying as it comes directly from his peers.

“Rory’s season was a model of consistency punctuated by milestone victories and ultimately the FedExCup in Atlanta.”

Koepka, who two weeks ago was named PGA of America Player of the Year, was considered the front-runner for the award after finishing in the top-five at all four majors, including at the PGA Championship where he picked up his fourth major title.