Aer Lingus mishap the only Irish connection with this Solheim Cup 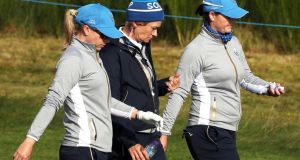 Team Europe captain Catriona Matthew - her team are the underdogs on home turf and that could prove a valuable weapon. Photograph: PA

Unfortunately the only obvious Irish connection so far with this week’s Solheim Cup at Gleneagles has been Aer Lingus’s involvement in losing and then trying to locate the clubs of two players - Europe’s Jodi Ewart-Shadoff and America’s Angel Yin - who made the transatlantic route through Dublin from Los Angelese on their way to Scotland.

Fortunately for both, after a couple of days of searching and pleading, with Yin’s clubs apparently ending up in London for some odd reason, the players were reunited with their prized golfing armoury ahead of this latest edition of the biennial match between Europe and the United States.

This is the 16th edition of the Solheim Cup - one established to mirror the rivalry that developed in the Ryder Cup once continental Europeans were brought into the fold in that male equivalent - and, as of yet, we are still awaiting the appearance of a first Irish woman in the match. This particular match has come probably a couple of years too soon for either Leona Maguire or Stephanie Meadow, but chances are that the breakthrough will eventually come in two years time in Toleda. Hopefully!

Anyway, this week’s match - starting Friday - may be watched with some interest from afar by the real powerhouse of the women’s professional game, the Koreans, who obviously have no involvement. South Koreans dominate the world rankings, with four of them inside the world’s top-10 on the Rolex rankings and no fewer than 12 inside the top-30.

Indeed, for those players competing in Scotland, those world rankings make for interesting viewing and would suggest that the Americans are top-loaded in comparison to the Europeans. Of the teams, the USA feature five players - Lexi Thompson, Nelly Korda, Lizette Salas, Danielle Kang and Jessica Korda - who are inside the world’s top-20; while Europe have just one, Spain’s Carlota Ciganda who is currently 12th.

The strength of the Americans, based off the world rankings, goes even further in depth. No fewer than 10 of the USA Solheim Cuppers feature in the top-50 and the two that don’t - Ally McDonald is 51st and Morgan Pressel is 52nd - actually fill the next two spots. So, Pressel in 52nd is the American with the highest world ranking.

In contrast, six Europeans are outside the top-50 . . . all the way down to Suzann Pettsersen, a surprise wildcard pick from captain Catriona Matthew, who - following injury and then taking time out following the birth of her son - has dropped all the way down to 665th in the latest world rankings. Her selection is a massive gamble, even if Matthew would like to see it as a master-stroke. Time will tell on that score.

Experience is the one element that is in the European favour this time, with no fewer than six rookies on the USA team compared to three on Europe.

Of that large number of rookies, USA captain Juli Inskter - who knows a thing or two about this gig have overseen wins in 2015 and 2017 - claimed: “My six rookies are far from inexperienced and I have no doubt they will rise to the occasion. Every team is different but we all know each other and what makes us tick. It’s been different this year because we have a lot of rookies . . . we’re not (partnering) veteran with rookie. I’m going to send a couple of rookies out there together, they’ve got to grow up sometime.”

In the overall scheme of things, the USA has a 10-5 winning count over Europe since the matches were first played in 1990. Going on the respective world rankings this time, the USA again hold a strong hand. Even in the betting, the USA are odds-on with a handicap of minus-one. The odds are stacked against Europe, but being the underdogs on home turf could prove a valuable weapon.