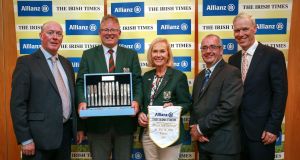 A 5am alarm call so he could hit the road early and so avoid any potential traffic jams on the M50 en route to The K Club provided something of kick-start to Balmoral Golf Club’s captain Donagh Finnegan’s day that would reap rewards in the national final of the Allianz Irish Times Officers Challenge.

Down through the years the Arnold Palmer-designed Ryder Cup course has provided a wonderful venue for some of the sport’s biggest occasions. There was the emotion of the Ryder Cup in 2006, with Darren Clarke in tears on the 16th green; Bernhard Langer’s monster eagle putt on the 72nd hole to force a play-off which he won in the 1995 European Open; and Rory McIlroy’s 3-wood approach from 271 yards across the river to the 16th green on his way to winning the Irish Open in 2016.

There is a plaque on the fairway to remind us all of McIlroy’s audacious risk-and-reward approach shot. And although Finnegan’s holing out of a 144-yard approach for an eagle two on the difficult par 4 sixth hole is unlikely to be honoured in the same, that rescue club shot was the standout in Balmoral’s winning total of 79 points that gave them a four-point winning margin over Rathfarnham, with The K Club utilising local knowledge to claim third place.

Finnegan’s efforts were more than backed up with assistance from lady captain Eleanor O’Neill and club official Michael Matthews. It was a day of strong winds which accentuated the challenge, and made course management and club selection very important.

O’Neill and Matthews had stayed in the Dublin area overnight with relations, while Finnegan’s early start ensured the three team members had time to hit the practice range ahead of the competition which featured finalists who had emerged from qualifying competitions in Portmarnock Links, Cork, Malone, Mount Juliet and Galway Bay through the year.

After a quiet opening to their front nine (37 points), Balmoral – a club with a rich Ryder Cup history of its own with four players (Fred Daly, Norman Drew, David Feherty and Eddie Polland) associated with the Belfast club playing in the match – came to life with back-to-back five points on the fourth and fifth holes before making the big figures on the sixth and seventh.

On the sixth, five-handicapper Finnegan’s rescue club approach found the bottom of the tin cup, and Matthews, a 15-handicapper, augmented that feat with a well-crafted par to give Balmoral an eight-pointer in the best two scores from three format. On the index one seventh both Finnegan and Matthews stole a march on many others with pars for a six-pointer.

The job was finished on the ninth, their closing hole, where Matthews’ five (nett par) and left-hander O’Neill’s six (nett par) played the hole solidly for a four-pointer.

Rathfarnham’s front nine of 41 points had them motoring along nicely, with captain John Mills, lady captain Sandra Gray and John Guinan all dove-tailing nicely. However, a miserly one point on the 11th (where Mills lost a ball and Guinan’s approach found water) proved extremely costly. Their response was admirable, a run of three successive five-pointers, but the south Dublin club would have to settle for a runner-up spot.

The K Club also had a strong front nine of 40 points, with captain Austin McCabe, lady captain Jo Murray and club official Beryl Bowden all contributing to the cause. However, two two-pointers on the way home – with Bowden alone scoring on the 10th and 16th – saw them run out of steam.

Peter Kilcullen of Allianz congratulated the club officers on their year of office and on reaching the final of the popular competition. He also praised the green staff of the Palmer Course for its superb conditioning in presenting a worthy challenge to the competitors.

For Finnegan – a former footballer with Antrim – this was what he called, “our All-Ireland win”. And richly deserved it was too.