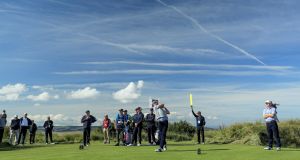 Andy Ogletree of the United States team plays his tee shot on the 14th hole in his match with John Augenstein against Euan Walker and Sandy Scott of the Great Britain and Ireland team during the morning foursomes matches on the final day of the 2019 Walker Cup. Photograph: David Cannon/Getty Images

Great Britain and Ireland captain Craig Watson admitted his side had been “outplayed” as the United States staged a superb fightback to retain the Walker Cup at Royal Liverpool. Trailing 7-5 overnight, the visitors won two and a half points from the morning foursomes before claiming eight of the 10 singles matches to secure an emphatic victory by 15.5 points to 10.5 points.

“The lads will probably learn a lot from this disappointment today,” Watson said. “It was a tough course the way it was set up. If you were ahead early pars were enough to stay ahead because birdies were going to be few and far between and the American boys did that very well. I don’t think playing in (more) wind would have made too much of a difference. I don’t think the conditions had anything to do with the fact that the Americans outplayed us today.”

United States captain Nathaniel Crosby, the youngest son of Hollywood star Bing Crosby, admitted his highly-rated side had been given a wake-up call with world number one Cole Hammer losing his first two matches before thrashing Purcell 6&5 in the singles.

“I am very excited,” Crosby said. “I spent a year and a half hand-selecting this group of talent and I got the team that I wanted. We were a crazy mix of personalities but all blended well. It was almost too much fun but after yesterday we sobered up and really focused today and it was an amazing afternoon.

“I let them just go play. They are very talented guys who believe in themselves. Their talent came to the surface and I could not be more excited for them and me; I’ve not won anything in about 38 years.”

Great Britain and Ireland won just one of the morning foursomes courtesy of Plumb and Sloman, who beat Hammer and Fisk 5&3. The Scottish pair of Walker and Scott fought back from two down with four holes to play to halve their match with Andy Ogletree and John Augenstein, but Fitzpatrick and Purcell lost to Wu and Alex Smalley and Gough and Hall were beaten by Stewart Hagestad and Akshay Batia.

That left the home side needing five points from the afternoon’s 10 singles matches to regain the trophy but that never looked on the cards after American players won the first hole in six of the 10 matches.

Scott was one of the exceptions and surged into a five-hole lead against Wu before holding his nerve after a mid-round stumble.

“I played very well today,” Scott said. “I started well and made a few birdies and just had a rough patch in the middle but managed to hold on for the win. It was three holes in a row that I lost, just poor decision making, but I knew I wasn’t playing bad golf so I just had to get back on track and concentrate a little harder.”

The previous American victory away from home came in 2007 with a team which included future major champions Dustin Johnson and Webb Simpson and PGA Tour winners Rickie Fowler, Billy Horschel, Kyle Stanley and Chris Kirk. Rory McIlroy and Danny Willett were among the Great Britain and Ireland team which lost by a single point at Royal County Down.