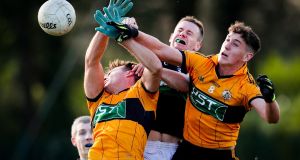 For all the cruel or unusually early timing of it, there is something perfectly apt about the first big football match of the new decade.

Because while words like old aristocrats and purists and traditionalists are often bandied about amid discussions around the game of Gaelic football, in the case of both Nemo Rangers and Corofin they are justified.

Only not necessarily in tandem.

It also comes against a suitably timed backdrop: Corofin, still fresh off winning a seventh successive Galway title and fourth successive Connacht title, are looking to keep alive their chances of winning a third successive All-Ireland, a feat never before achieved in club football.

Yet Nemo remain the most successful club and top the roll of honour with their seven All-Irelands, the last of those coming back in 2003.

There is also that stark reminder of their changing fortunes from the 2018 All-Ireland final in Croke Park, less than two years ago, when Corofin blew the doors and roof off Nemo and won by 15 points, 2-19 to 0-10.

A few months after that, Nemo exited the Cork championship at the quarter-final stage, losing to Castlehaven 1-11 to 0-4. It looked like at least some period of transition beckoned. Instead, they’ve recently won back a 21st Cork title and 17th Munster title, all in just the second year under manager Paul O’Donovan. It’s been a quick recharge and reprise.

For former Nemo midfielder and Cork captain Derek Kavanagh, also central to the team that last captured the club title in 2003, this swift return to the All-Ireland semi-final stage probably exceeds s Nemo’s own expectations.

“Being honest, yes, I am kind of surprised we’re back there this fast,” says Kavanagh. “That was a massive drubbing in 2018 and, psychologically, it takes a lot to get over a beating like that. Then a few players go. There’s a change of management. And you’d think there would be a few years of natural rebuilding before they become Cork and Munster champions again. You’d think, look, we’ll happily get back there in three or four years time.

“So to get back in two years, at this standard, or potentially a higher standard, is certainly quick. That’s down to a few things really. Paul O’Donovan has come in, seems to have found the perfect blend of youth and experience. In his management too, with the likes of Billy Morgan on the sideline, just there for some further consultancy.

“Then you have Paul’s son there at midfield, Alan, a real powerhouse, and his other son, Kevin, at wing back, seems to be potentially Cork intercounty standard. So those younger guys are intercounty standard. And that’s bolstering the guys who have been around the block, the likes of Paul Kerrigan, well over 10 years in there.

“That’s the recipe, once all the ingredients are there. On top of that they’re obviously doing a hell of a lot right in terms of their preparation, their approach to games, from what I hear, their attention to detail and analysis of teams is massive. They’re putting huge time and commitment into their preparation, just really hard-working, the whole lot of them.

“Then again it’s always a good blend when you’re winning. So you have to put some balance on it too. All is going well now, and people saying Paul has masterminded all this. But 12 months ago people were saying maybe it wasn’t working out for him. It just goes to show how the business works, once you get a run. But in fairness they’ve been playing extremely well all year, beating a lot of teams well, by more than 10 points.”

Nemo are now within reach of another record of their own; a 13th All-Ireland final, to be played on January 19th at Croke Park. Talk of players having to cancel Christmas stirred some debate about the timing of these games. But Kavanagh, also involved with the Club Players Association (CPA), sees only positives.

“I can only speak for myself, but having played in a good few All-Ireland semi-finals over the years, I always hated the wait. Usually you’d have the Munster final a few weeks before Christmas, then five, six weeks off, then come back at the end of January for four or five weeks training, all for one game. Which was insane. For one hour?

“I can say from my own playing days, I would have liked the next game played ASAP, whether that was Christmas Day, or January 4th. Having a 10 or 12 week break between one stage of the competition and the next was just stupid. All to have the final on St Patrick’s Day. That made no sense.

“The sinister side of me thinks the decision was made more because of pressure from the inter-county side, to ensure players are ready for the league. But I’d take it, because it does reduce the time on the club player, and helps close in the calendar year. Are they suiting the club player, or just freeing up the county player? But it is a step closer to the calendar year, when everyone can down tools for the Christmas period.

“But again, speaking from my own playing days, I’d bite this game off your hands, four weeks after a provincial final. I’d gladly train on Christmas Day if needed, would love it now, absolutely love it. It shouldn’t take much motivation. It’s not for me to say, if it’s fair or not fair. But it’s the age-old thing, you don’t really appreciate it when you’re out there. But when you look back, you can’t beat a big game a football, on the big stage, with a lot at stake. You are putting your life on hold, but you don’t get that high in many of the other run-of-the-mill things in life.”

Kavanagh shows no hesitation in declaring Corofin “the proven best club team, ever”, and not just because they’re unbeaten since February 2017:

“That’s a big statement, but I don’t say it lightly. They beat Nemo by more than 10 points in an All-Ireland final, and 12 months later did the same to Dr Crokes. They’re beating, smashing, who are traditionally the best club teams of all time, and they’re here again.

“Obviously Corofin will have to be beaten at some point, and Nemo are certainly in with a chance. Being the best club team of all time brings its own pressures too.”

Kavanagh retired from Cork after their 2010 All-Ireland win. His own club record, he suggests, reflects the bigger picture of Nemo on the All-Ireland stage.

“It’s a good record, but I’d look back on my own career, I won eight county titles, six Munsters, then only one All-Ireland. So I’d be looking at the ratio there and put a big question mark over my own period.

“It does tell you how hard the All-Irelands are to win. Nemo are still top of the pile, but considering the amount of Munster clubs that we’ve won, I think we would want more.

“As a club, it’s about trying to reduce that ratio. I know for myself, losing an All-Ireland club final in 2001, 2002, winning in 2003, losing another semi-final in 2006, another final in 2008. I look back on my career with a lot of hurt, around finals and semi-finals. You probably do remember the defeats more, actually.”