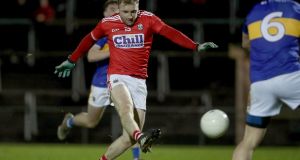 Cork’s Michael Hurley scores one of his three goals during the McGrath Cup game against Tipperary in Mallow. Photograph: Bryan Keane/Inpho

A hat-trick of goals from Michael Hurley highlighted Cork’s progress to the McGrath Cup final after a big win over Tipperary in Mallow on Thursday night.

All his goals came in the first half as Cork turned around 3-11 to 0-5 in front having blitzed the visitors with their speed and finishing ability.

Tipp were more competitive in the second half, but Cork’s victory was never in doubt.

An injury-time goal from debutant Gerard Stack fired 14-man Limerick past Waterford and into a McGrath Cup final with Cork on January 11th.

In front of a tiny crowd of 187 at Fraher Field, Stack delivered 1-2, Danny Neville netted on 32 minutes and goalkeeper Donal O’Sullivan nailed two dead balls in the first half.

Billy Lee’s charges enjoyed an eight-point advantage at the break. They went 25 minutes without a score in the second half however and lost Josh Ryan to a straight red before points from Cillian Fahy, Jamie Lee and Séamus O’Carroll lifted the siege.

Waterford, spurred on by Jason Curry, Darragh Corcoran and Michael Kiely, closed to within a single point after a storming second-half comeback as the hosts struck seven unanswered points. They squandered five dead-ball chances however and ended the game on 11 wides.